Approaching 7 months from the start of the National Covid-19 Lockdown, and after a few months where it began to look like the country might have things under control, it now begins to feel as though we’re heading back to the way things were back in March. Wales has today announced a 2 week total lockdown beginning on Friday, and parts of the rest of the U.K. are now under “Tier 3” Very a high risk restrictions. Here in Essex we’ve just been moved into Tier 2 (High risk) by Essex County Council - something which is mystifying the residents of this part of the county as our number of cases per 100,000 is lower than a good many other areas of the U.K. where the restrictions are still at Tier 1 - Medium risk - level. Ironically enough excluded from the Essex-wide T2 restrictions is Thurrock - as a unitary authority they were able to “opt out” in spite of the fact that they have the highest figures of anywhere in the county.  It’s no wonder people are finding things confusing!

Other areas of the country that have moved into a tier 2 have been reassured that if their numbers drop, a return to tier 1 will follow - for us in Essex though things are not so clear-cut as our numbers are already well below the level that was originally suggested as the one likely to trigger the increased of risk designation. As things stand, we’re not allowed to visit friends or family indoors, whether in a private home or meeting up in a pub or restaurant, although the guidelines are at pains to reassure us that we CAN meet with you to 6 people from outside of our own household in a beer garden, or park - very helpful at this time of year! Essex CC have given no clue about how long they expect this state of affairs to last - meaning that we are facing the very real prospect of Christmas being effectively cancelled for the majority of people - for many the last straw after a really tough year.

Here, things continue much as they have been. I am still furloughed, and still with little idea how things will pan out when that ends at the end of this month. MrEH continues to work from home, with occasional trips into London to his office - when he travels out of rush hour times where possible, the Underground is quiet during the day, but approaching as busy as ever in the evening rush, at least. I made a trip to Lincolnshire a couple of weeks ago to see pals and watch the Reds final couple of practises of the season - and also squeezed in two trips to the rather wonderful Dambusters Inn - goodness knows when I will next get there! I’m maintaining the routine of running three times a week plus lots of stretching, and also trying to add in some strength training also - a habit I desperately need to get back to. I managed just one airshow in the end this year - Aerolegends ran a successful a COVID-secure show at Headcorn Aerodrome at the end of September, perhaps a blueprint for how things may need to be done more generally next year, we will see...

Email ThisBlogThis!Share to TwitterShare to FacebookShare to Pinterest
Labels: COVID19 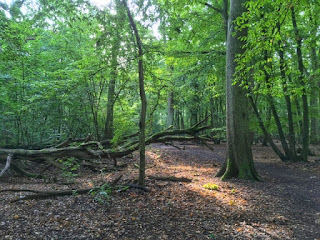 4 weeks of my return to running plan complete and so far, all going well. A commitment to running three times a week was the key thing, (with 2 the first week as otherwise it would have meant running three days on the trot - not a good idea!) and sure enough I hit that target. I had no real mileage plans for running this month - just consistency, aiming for at least 2 miles per run, building up the time and distance slowly.

As well as the physical side of running,  I’ve been focusing on the mental side as well - I’ve always found that reading about running makes me more enthusiastic about it too, so discovering Runners World magazine on the library website has been excellent. Also good for enthusiasm is new kit - and I’m loving my new Capri-length leggings from Lucy Locket Loves. Friends have been singing their praises for a long while, so when I saw some good deals come up I leapt at the opportunity and bought a couple of pairs, and they are indeed every bit as good as I was told, I’ll be buying more! Also finding new routes to run - like the gorgeous patch of woodland above - is always a great incentive. Views like the one in the photo just stop me in my tracks every time!

As anyone who runs knows, one of the big temptations is to try to do too much, too soon - increasing your training load too much can easily lead to injury, but when the enthusiasm is running high it’s REALLY easy to be drawn into overdoing it! Being an impatient sort, I struggle with this as much as anyone, but have tried to rein it back as much as possible - 4.5 miles in week one, 8.6 in week two, 10 miles last week and 13 this week. It’s amazing how quickly the body remembers how the increased mileage feels too - 4.5 mile runs this week felt no harder in terms of effort than those 2 miles back in week one!

One more thing I have done to bolster the enthusiasm is to upgrade my Strava subscription to the premium level. For the equivalent of £4 a month it gives me far more stats than the free version did - and I’m endlessly fascinated and motivated by the facts and figures around my running, so that is guaranteed to act as encouragement. My current favourite thing is that I can compare my efforts on particular stretches of runs (known as segments on Strava) to effectively compete against myself which definitely appeals!

So - where from here? Well initially it’s just continuing with the three runs a week, and keep chipping away at my annual mileage target too - I signed up for the 500km challenge again way back in January and thanks to a fair few months during the summer with almost no running at all I entered September a fair way behind on that. Having said this, the same thing occurred last year, and I made the target with a few days to spare, so I’m confident that all being well I can do the same again. I’ve set myself a goal for 50 miles this month., as well as joining in with a few virtual challenges too. I want to try to do at least one run a week where I note my 5k time to feed through for “Notparkrun”. And finally I want to start working on increasing my distance again, so one run per week will get slightly longer, traded off against another getting slightly shorter.

Above all - and by far the most important thing - is to keep enjoying it, that is, after all, the best incentive of all!