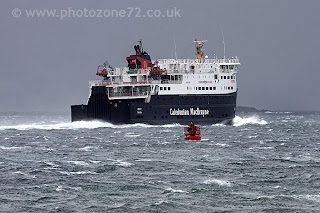 Firstly, apologies for the pun. I'm afraid it simply had to be done though.

I can honestly say I would not have liked to have been on board MV Hebrides when she sailed from Lochmaddy earlier today - the wind was blowing so strongly that out on the headland where this was taken from it was difficult to stand up against it - indeed this shot (taken with the 300mm lens) was only possible thanks to Ben shielding the worst of the wind and the IS on the lens working away..... The ferry made all of her sailings today though although she was an hour and 15 minutes late when she finally returned to Lochmaddy to her berth for the night - it must have been an incredibly long day for the crew. The freight ferry is cancelled again tonight for the second night on the trot, and sailings between Berneray (to the North of here) and Harris (which is the alternative route for freight, allowing them to then cross to the mainland from Lochmaddy) were suspended from just after lunchtime so the Co-ops will be low on stock tomorrow.  Such is Island life though - since the collapse of Highland Airways the folk on Lewis are getting their newspapers across on the early ferry - meaning that the papers aren't getting to the shops until mid afternoon at the earliest. They're not happy about this, and vast piles of papers are being left unsold.

The wind is still howling about now - although less so than a couple of hours ago when it peaked.  It's still hard enough now though to make the glass in the (double glazed) windows bow slightly, and I'd guess we may have lost a few more slats of fence in the morning.