Of potterings and overdue projects...

Another fairly quiet weekend. A walk on Friday, at the local RSPB reserve. I'll post on that in its own right shortly but it was nice to get back there - it'd been a few months and I used to go regularly.  A long-distance-ish trip to a rugby match with MrEH on Saturday. You don't mind the drive so much when what is at the other end is an enjoyable match against a nice group of lads, some cheery friends to chat with, and a victory for our team! It was an important match too, being against our closest competition for the top-of-the-table spot so the victory was all the sweeter for that!

Sunday was a day of "getting things done" - some cooking (breakfast muffins and flapjacks, lunch pates and rolls) and then some pottering out in our pocket-hankerchief sized bit of garden. Our rather lovely clematis has started to get some green signs of life on it we noticed, and this lead to a question of how we were going to support it this year, as our previous support of lashed together canes was looking a bit the worse for wear, not really being intended for a long-term installation! Then I remembered the piece of trellis that we found abandoned some time ago. 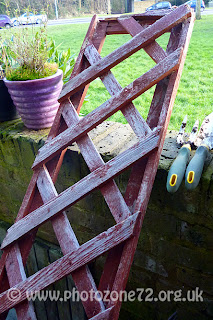 It was brought home because we had the idea of being able to climb *something* up it, but had never made it round to the right side of the building even, never mind being put anywhere that anything could make use of it! MrEH went and grabbed it and we put it in place - a perfect fit! Now you might remember from This Post that we have a bit of a penchant for painting gardeny things green...and as the trellis was a rather unattractive red-ish colour in some places, and bare and rather grotty looking wood in others, we decided that it too should get the "green treatment" so we dragged it out again and set to with the paintbrush...a couple of coats later it was looking substantially better! 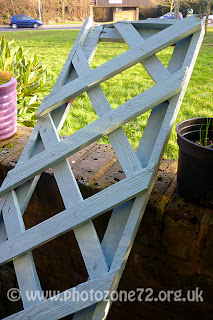 While I was doing the painting, MrEH turned his attention to another long neglected project - our second freezer lives in the gap between out two front doors, a space which also houses the coffee machine & grinder, things like thermos flasks, and all our baking sheets and roasting tins. For the last two years we've been talking about fitting a couple more shelves in there just to make life easier - the first of which would create more space by sitting just above the top of the freezer itself, and also reduce the risk of losing things down the back of it. The timber was all ready - a piece of wooden batten we bought when putting the first shelf in there not long after we moved in, and some old shelves which our predecessors left behind (but which, quite frankly, were beyond hideous, so lasted about 30 seconds after we got in through the front door on moving day!) and just needed cutting to size and fixing in place. No pictures of this process I'm afraid - the light wasn't really good enough by that stage, and anyway I was outside sorting that trellis out, remember? The trellis which was now dry enough to move, and be wedged in place and have little bits of clematis trailed through it, to be exact... 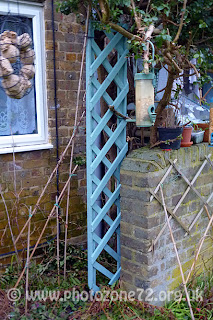 ...looks good, doesn't it!  By the time I got back indoors the shelf was done, and we were able to put all our odds and ends back on it - looking far nicer than before! One day when we had no other plans got rid of two annoying little projects that had been being put off for ages, at absolutely NO cost to ourselves as we had all the required bits and pieces for them already. All good!

A good friend of ours recently reminded that those wee baggy jobs often take more worrying/avoiding than the actually doing. Well done. Love the lattice colours gorgeous. What colours the clemitas? Excellent pottering!

The Clematis is sort of purpley - very pretty indeed. In fact (this'll take you by surprise!) I "think" it's clematis Jackmanii...might be wrong on that mind you!

We bought that tin of wood preservative/paint about 9 years ago and there's still some left now!

I have the same colour paint on things in my garden! Lots of things left behind by the previous owner which looked grotty ( a couple of archways and an obelisk) got the paint treatment and now look fab! We brought the paint with us from the old house - it's like a never ending tin as it did the summerhouse there several times and there's still lots left.

We keep going back to the tin to do "just one more thing" and it's like is quietly replenishes itself when we're not looking! It's such a gorgeous colour - when we do finally get to the end of the tin we'll be buying another!