I do believe it might have sprung at last....after the sudden turn of cold weather again during last week, the promised warmer temperatures made an appearance this morning, and a quick potter outside revealed some hopeful signs... 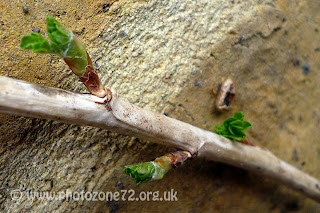 The first leaves appearing on our Gooseberry bushes. We planted these last year to replace the bush that was killed by being buried under scaffold for 8 months back in 2010 - it had struggled on manfully but was getting thinner and thinner and eventually we decided it had to go. The replacement needed to have properties which would over time deter anyone wanting to come and peer in through our windows, and ideally was to be useful as well, and so the spikiness (both is texture AND taste) of the Gooseberries seemed to fit the bill. Hopefully we might get some fruit from them this year. 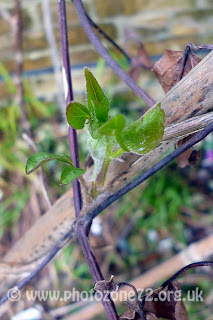 This is purely ornament rather than use - a rather lovely clematis. I can't remember for certain which one it is but I have a feeling it might be Clematis Jackmanii  - either way it produces stunning flowers in the spring, and, so far, has proved immune to our usually ability to kill anything that climbs within the space of 6 months. Of course as you might remember from a few weeks ago it now has a nice green trellis to climb up, as well. 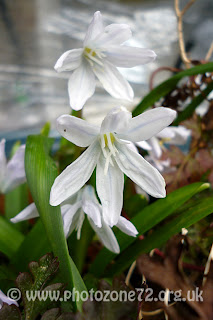 Right then, might need Fay's help for this one - these come up each and every year, look very pretty, and we have no real idea of what they are! Not even certain whether it is something that we planted (they are in a terracotta planter which sits on the balcony wall) or whether they just sort of appeared there....things do that, sometimes, in our garden. 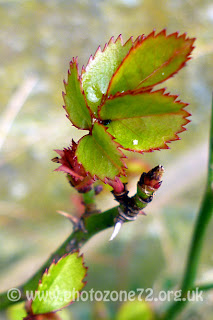 Aren't the leaves on this little rose beautiful, too? This is one of those little patio roses that people buy more for the instant loveliness of the flowers than with any intention of keeping them, but this one, on being planted into the garden, went absolutely mad and is still happily flowering away years later. It has the most gorgeous tiny complex red flowers, which it seems to produce from about April through to October without pause. 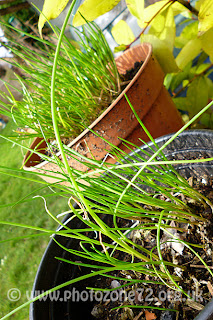 Finally, I was pleased to see signs of life from our herbs, too. We do like our herbs and currently have two good sized Bay trees - one planted in the garden outside and the other which sits in a pot on the balcony, plus a good sized rosemary in a pot, also on the balcony. We also have a large sage bush which, in  spite of ruthless haircuts each and every winter invariably ends up larger than ever by the time midsummer comes around. These chives (and their parsley next-door neighbour) were concentration camp (Supermarket) refugees - they settled down brilliantly in their new home and have repaid the time we spent teasing their roots apart and repotting with a ready supply of fresh onion-ey greenness through last summer. Fingers crossed we'll get more of the same this year!

Now we just need to cross our fingers that this time, Spring is here to stay...!

It's lovely to see the early buds and leaves. The clematis is beautiful. It's sunny here again this morning, so there is some hope for spring, yet.

I think the plants have got fed up with waiting and are coming throughn regardless now Wendy. heavy snow forecast in our area for tomorrow I think though, so they're going to get a shock!