I took way too many photos on our Underground Overground Walk on Sunday - I actually joked to MrEH that I reckoned I was going to have to do multiple blog posts if I wanted to share them all with you as putting them all into one would just make that post far too slow to load up. Then I thought about it a bit more and thought "Why not?!" - it would be great to think that someone else thinking about walking the Victoria Line might find my post one day and get some inspiration from it, so I'll link this and any subsequent ones into it - our "interesting things seen" are mostly different to those of the other people that have completed the walk so I reckon there's space for some more posts on the subject!

When we arrived at Walthamstow Central we walked across the road to the Bus Station so I could use the loo there - I felt a pre-emptive visit might be a good plan. In the event they were closed for repairs, but while I was finding that out MrEH spotted that around the glass enclosure that surrounds the escalator shaft to the tube were a whole load of china garden-type ornaments. When I saw this one... 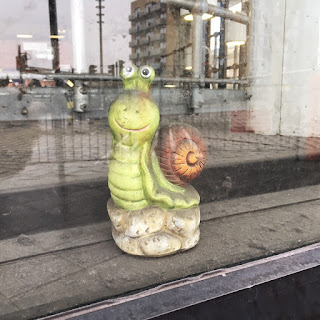 ...I took a photo of it saying to MrEH "You'll see why later in the walk...And so will you...no scrolling now! (Unless you're a vegetarian, in which case you might like to scroll on past the next photo...)

I loved the section of Walthamstow Market we walked along and was telling MrEH all sorts of interesting odds and ends that I remembered about it, both about the history and things I remembered from my childhood too. Manzes Pie & Mash shop is an East London institution and I can clearly remember the delicious smells emanating from it as we used to walk past. It's a beautiful shop front too - very traditional of its type, and I was pleased to see that it's now been given a Heritage Plaque. (My parents can remember the "eel man" outside chopping live eels into portions for customers to purchase, take home and cook - all the little individual sections used to wiggle around on the board as the nerves took a while to catch up with the fact that the creature itself was dead!) 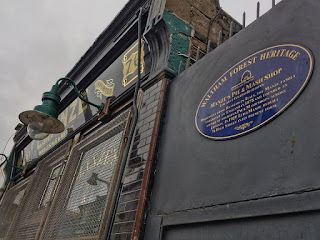 We veered off the route that a lot of others had taken when we got to Pretoria Avenue - I knew exactly where the route of the line ran at that point - because of this... 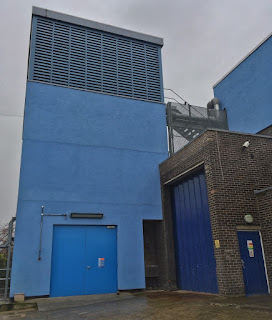 That is one of the ventilation shafts that helps to keep the air fresh down at platform & tunnel level, and it happens to be right next to the school I attended for 4 years when I was little - you used to be able to hear the noise of the trains from it occasionally, although not since it's been fitted with a fancy-pants water cooled cooling fan I'm guessing - although that 3 degrees of cooling it apparently achieves is  much needed in those deep level stations! It's not the most attractive of buildings but I do like the fact that they've painted it Victoria Line Blue - and I wondered whether perhaps more of them had been painted similarly.

Onwards and from Blackhorse Road station came what I suspected would be the dullest bit of walk being on busy main roads and without any backstreets to divert through to add a bit of interest (and some peace and quiet!). Part way along Ferry Lane though you pass by the reservoirs/Walthamstow Wetlands nature reserve which makes for a bit of a better view.. 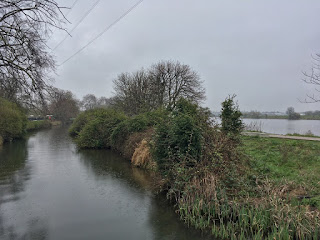 ...and crossing to the other side of the road we crossed over another walk we did a while ago - the Lea Navigation - you might remember that we walked that back in 2014 - this time we kept walking on down Ferry lane though, tempting as that towpath looked even in the rain! 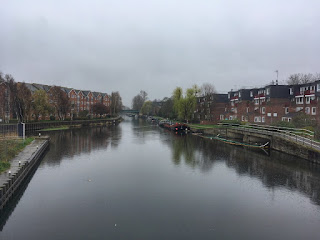 Finally just up the road from Seven Sisters station and brightening a very dull stretch of the Seven Sisters Road, we reached it... 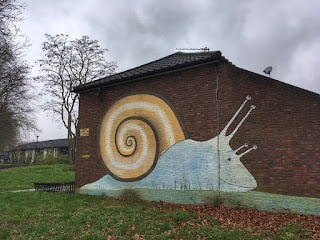 This snail has been painted on this wall looking exactly the same for as long as I can remember. It must have been repainted a number of times I imagine but always in the same colours. A quick search on Mr Google has confirmed that it has in fact been there for pretty much as long as I would remember as it dates back to 1976, it was painted for the Jubilee. The Silver one, that is, not the two we've celebrated since. Oh and it's called Sid - next time we pass I shall be sure to greet it by name.

I'll be back with another of these posts at some stage - goodness knows I've got plenty of pictures to share still!