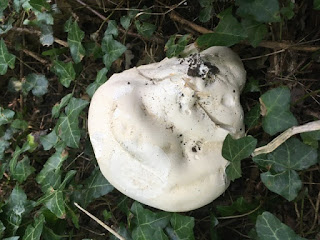 I'm working on distance for my September challenge at the moment. It's commemorating the 80th anniversary of the Battle of Britain, so I wanted to centre it around the number 80, but having been running relatively little recently 80km running in the month was going to be too much to set my sights on, so instead I have looked to combine walking/running distance. I'm aiming to do an average of 80km per week across the 4 full weeks of the month - 320km total across the month. A week and a half in I'm doing OK - being in the Hebrides for the first week should have been an absolute gift, but in the event we had two days of appalling weather that week which combined with the first day of our journey home reduced our walking distance rather. Still ended up on 55 miles though. Week 2 also saw a couple of low mileage days, and I came in just below my target mileage, meaning that I "used up" the extra miles banked in week one. Week three is so far looking rather good - with 4 days of the week done I'm currently on 36 miles, or 58km, giving me a decent chance to bank some more additional distance against the risk of poor weather next week.
To build my mileage I've been looking for any excuse to get out and walk - so yesterday afternoon I grabbed my litter picking stick and a black sack and headed to the woods for another rubbish clearing wander - first a circuit picking straight rubbish, then a second for recycling. It's getting better with just a half bag of each this time - hard to say whether that is because people are dropping less, or just that someone else has also been litter picking, though. While scanning about for rubbish though, my eyes lit on the item at the top of the post - no less than a giant puffball mushroom! This particular one was around 8" across - plenty big enough for 2! Yes, of course we ate it! There was a second one too, but that has been left in place in the hope that it will spore, creating more of them for the future. This is the first time we've seen these so close to home so it would be nice to hope that some more appear - I think that particular area will be a feature of our walking for the next few weeks anyway!
Beyond mushroom hunting, I'll just continue clocking up the distance, three runs per week of 2 - 3 miles each, just to rebuild the consistency. My daily morning walks are routinely 4 - 5 miles now, I leave MrEH to head home when he needs to start work and round up the distance on my own. I'm also still doing most of our shopping on foot - double value there as it builds mileage for me, while also reducing mileage and fuel use for the car so win/win. Might have to find myself a challenge for October as well, to keep the momentum going!
Robyn
Posted by Robyn at 10:10 pm