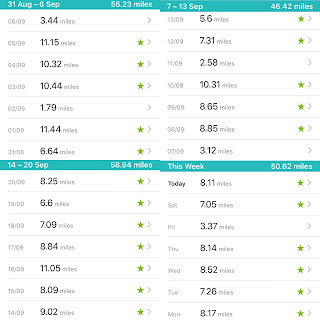 The challenge: 80km per week averaged over 4 weeks = 320km total. This was total movement - walking, running and any swimming - everything recorded in either my FitBit or my Garmin counted. The challenge was for the anniversary of the Battle of a Britain, 80 years ago this year, hence wanting to include the 80 in there. 80 miles per week was a step too far, and 80km running over the month was dismissed as being too much to throw myself into off the back of several weeks of barely any running at all. The 80km total movement in a week though while relatively demanding (a little under 11.5km per day) was achievable even allowing that I knew I had several days in the month with guaranteed lower mileage (2 days travelling home from holiday, 2 days travelling to/from a camping trip with friends and a day at an airshow) - I could add extra distance in other days to take account of that easily enough. I also liked the idea of being able to mix up walking and running, and even possibly a swim - variation is key to keeping things interesting!

I enjoy a challenge of this sort - and particularly at a time like this when I’m both trying to keep activity levels high generally, and aiming to rekindle some consistency in running. Knowing I have a target to aim for encourages me to stay motivated when perhaps otherwise I might give in to not quite feeling like lacing up and heading out -and a monthly goal is easier to focus on than a more long term annual one. The promise of a medal to come if I achieve my target is all the more encouragement too!

I ended the 4 weeks on 339km, so well over what I needed. More than that though I committed to - and achieved a return to regular running when we got back from the Hebrides - 2 runs that first week back, and three runs each of the next two weeks. I should end this month on 30 miles total running distance - which is my second highest monthly total this year, and a great place to build from going into the end of the year.

I’m keen to find another challenge to crack on with for October. I’m going to be using Strava for running goals - I’ve set a 12.5 mile target for this week to start with - and we will be keeping up with our regular daily walks too - on days when I am not running I’ll be looking to cover at least 4 miles on these. I’d like to swim a couple of times but this will depend on finding a local pool which is open as the open air one is now closed for the winter. I want to incorporate more strength training, and continue with plenty of stretching and mobility work too as those are all things which will help with the running too. I’m not going to set any overall distances to aim for outside of the running - October will be more about variation and consistency. Bring it on!