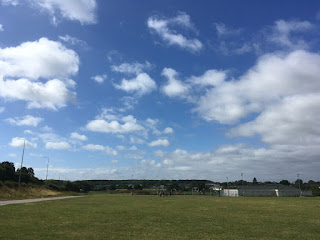 An utterly glorious run this morning! I’m still struggling a little with actually getting out of the door to run - and I’m still not entirely sure why, but for now the thing that is working is to get my running kit on first thing, then head out straight after we get back from our start-the-day walk - otherwise known as “before I talk myself out of it” and today was no exception. I followed the route we took for yesterday’s walk to start with - heading for the Common. Thankfully no downpour requiring shelter to be taken today although it had clouded over by the time I reached the top - typical! FAR nicer temperature wise than it has been of late though.

Then, over the M11 motorway- far busier now than it would have been a few weeks ago of course, but still I think not quite as much traffic as would have been normal for that time on a Monday morning,  an appreciable amount more traffic noise though! My route then took me a short way along a quiet road before turning left along a footpath which runs through a short section of woodland before turning right and running along the field edge parallel with the M11 and bringing me to a bridge allowing me to cross back over again... 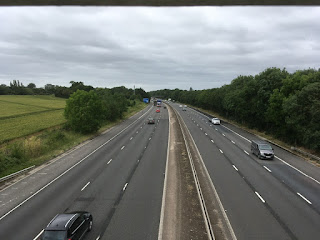 From this point I had a lovely long downhill stretch - firstly through some paths, then quiet residential streets, and then back onto the town’s wonderful network of old roads - now cycle and pedestrian tracks. We’re incredibly fortunately to have these - it’s possible to get all round the town using them and barely needing to touch the main roads at all - today I used only a few short stretches of pretty quiet roads, plus having to cross over one slightly more major one (And the motorway, but that didn’t bother me much at all!) - far more pleasant than constant pavement pounding! 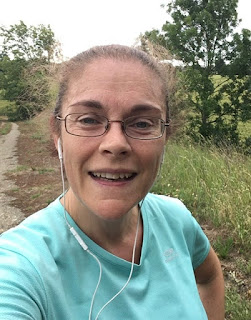 I’m not one to take regular selfies when I run but today I was enjoying it so much, and the cooler temperatures meant I wasn’t quite so closely resembling a tomato as sometimes occurs when I run - so I made an exception - as you can see from today’s “sweaty selfie” above. It felt great to get this route run - when we walked it a few weeks back I started thinking it would be a great one for a run and I really wasn’t wrong. In spite of the rain over the past few days road shoes coped fine with it too although I imagine at some times of the year the section round the field in particular and perhaps over the Common too might benefit from the added grip of trail shoes. Today though 5 miles, no mud, and a lovely cooling breeze! Bliss!