Found it! And a bucket thing... 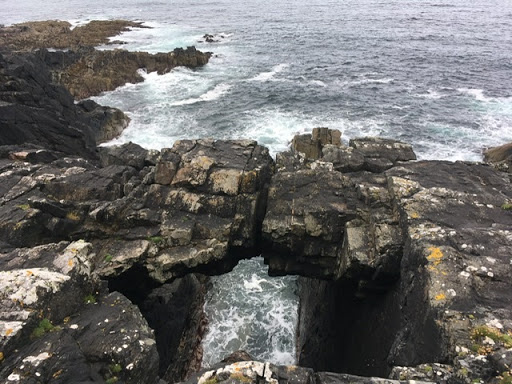 Some background - Kettle Cottage, where we are staying, is named for  nearby natural rock arch and cave which forms a “blow hole” in the cliff - called Slochd a’Choire or “the spouting kettle” as with the right weather conditions and high seas it shoots water high into the air! Last year we looked repeatedly for this feature but were entirely unable to track it down. We consulted maps, guides and even the Scottish registry of caves and mines which provided a grid reference - all to no avail and we had to leave, defeated.

This year we’re back and, undaunted, decided to have another go. We’ve already been out on the headland several times and must have scoured every inch of the coastline in the area of the grid reference numerous times now - but this morning headed back at low tide for another go - with the lower water levels meaning we could examine more of the rocky areas and hopefully see it from a new angle. In spite of this, still nothing. We began wondering whether maybe the maps and grid references we’d seen were wrong - whether perhaps because of the “official” nature of the site providing the reference, others have just copied it without checking, thus underlining the incorrect information simply by further repeating it. So we looked for something different - and sure enough found a reference in a book to a different way of approaching it....and FINALLY, we found it! It turned out to be on an altogether different part of the headland - no wonder we couldn’t track it down before! Once we had found the new information it proved surprisingly easy!

So that was the first thing ticked off the wish-list for the day. The second came this afternoon when the wind dropped and as a result the temperature increased a bit...and we decided that it was time to don swimming gear and have our first ever Hebridean sea-swim! We were undecided as to where until we began to walk towards the beach we thought might work...then looked down into Bàgh Hogha Glan (Hoglan Bay) just below the cottage, and it looked SO enticing...! The water definitely felt cold when we first waded in, and it took me a good 10 minutes of edging a little further...and a little further...and shrieking when waves splashed me much to MrEH’s amusement, but once actually fully submerged it wasn’t too bad at all and I had the most GLORIOUS half an hour swimming up and down and bobbing gently in the waves. It’s SO long since I’ve swum at all thanks to this wretched virus, which made it even better. Swimming with a view of St Kilda way off the the horizon, being able to see straight through the water to the white sand below me, with birds flying overhead and at one stage being mildly startled by a large leaping fish just a few metres away (a salmon, probably?) really was very special. I did manage to get stung by a jellyfish, annoyingly, in spite of keeping a sharp eye out for them - not badly, but it still feels rather stingy and prickly several hours later! In spite of that though undoubtedly one of the very best things I have ever done on trips over here - jellyfish notwithstanding I’ll be hoping to repeat that at some stage!