Has the U.K. Weather got Coronavirus? 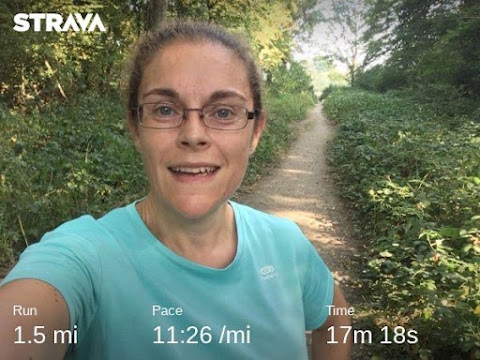 Well, it seems to be running a temperature, and also appears to have developed a persistent cough across most of the country over the last few days! Seriously though, there has been some awful weather in many places over the past 24 hours - with the worst effect being the train derailment up in Aberdeenshire of course in which 3 people have sadly lost their lives. We’re so accustomed to thinking of our weather as being fairly uneventful - much as we like making a fuss about anything  bit extreme for us - that it comes as a bit of a shock to be reminded so brutally that actually it does still come with it’s risks from time to time.

Here the worst we’ve had so far is roasting hot temperatures, a brief shower of incredibly large raindrops this afternoon and a few rumbles of thunder, although even that has been enough to make this evening feel distinctly cooler. Sleeping has been a challenge these last few days so hopefully it might feel a bit better tonight.

I did another short run this morning - the photo above may have already given the game away on this one! Slightly further, and a higher running:walking ratio than Monday - hence the slightly faster pace too (Monday was a stately 11.54 min/mile pace) and again, everything felt fine I’m pleased to say. The next one will be Friday and slightly further again - I’m determined to build this back up again slowly and steadily though. I’ll probably do some longer ones in the Hebrides but there will be a lot of walking involved too - there always is up there as a rule - even the 10k race I did there last year saw lots of breaks to take photos etc and I still managed to finish inside my target 60 minutes which I was thrilled with! I’m a long way off being able to achieve that at the moment! I’m starting to feel enthusiasm for running again which is great though! Hopefully the weather will have cooled off a bit by the time Friday comes around too and running might feel rather more pleasant and less sweaty!