Remember those new years "Not Resolutions"? I thought it seemed like a good time to do a first progress update on them - I'm keen to try to do that a few times through the year - mainly to keep myself accountable more than anything else, but also to help with tracking my own progress. I'd be the first to admit that somewhere I tend to fall down on this sort of goal-setting is to fail to review things, and so lose focus - so one aim for this year is for that not to happen.

Generally speaking at the moment, life is good. The one thing from above that has so far surprised me the most is the difference I'm feeling as a result of being mindful about refined sugar. I've identified habits that I didn't really know I had, but have also confirmed my suspicion that I'm really not someone who generally speaking eats a lot of sweet stuff. On that basis I don't feel that a "no sugar" target is particularly relevant to me - but I am actively researching what sugar is in the foods I choose, and cutting back where appropriate. Just in the 9 days I've been doing this, I feel like I have more energy - which is a surprise as if anything I'd assumed that the opposite would be the case, but this could be as a result of the healthier choices that are being made as a result of thinking about sugar?  I've established that I tend to have a habit of eating sweet stuff at weekends - a cake after tea on a Saturday for example, and that is something I can consciously seek to change. There are foods with added sugars that I won't be giving up any time soon - bread for example - and others that I've always been able to easily say no to in any case - chocolate.

I may do a full blog post on my findings from the sugar experiment at some stage - watch this space!

Email ThisBlogThis!Share to TwitterShare to FacebookShare to Pinterest
Labels: Consciousness, Home, Me, Thinking about...

As we started to plan for getting the kitchen done, it suddenly occurred to us - we have an awful lot of stuff in that kitchen, and before too long, it's all going to have to be stored somewhere! Quite a scary thought, to be honest. But it didn't take too much time for us to realise that it was relatively easy to turn that into a mini frugal-food-challenge!

So, for the past couple of weeks I've been focusing the meal plan around using up contents of the cupboards, fridge and freezer. As and when it comes to time to start clearing the room we'll be switching on Freezer 2 and transferring the contents of freezer 1 over to there, but we will also need space in there to store "home made ready meals" that we can easily heat up in the microwave while we're without full cooking facilities. Things like Chilli and bolognese are going to feature I think, and we'll have the camping stove as well which will give us a single ring "hob".

For the moment though it's all about using what we have - so the first thing was to go through the cupboards so we knew what we DID actually have. Some things took us by surprise a little - the pack of sugar free jelly crystals that went out of date in (I think) 2008, for example. We can be quietly confident that there is nothing much natural in those, as they smelled, looked and tasted exactly as normal! 5 tins of red kidney beans also came as a little bit of a surprise, along with 8 cans of baked beans. Yes. 8. No I have no idea.  Other things less so - half a jar of smoked peanut butter which never quite hit the spot on toast. About half a pack of pudding rice - it takes an AWFUL long while to use up a bag of pudding rice you know! Quite a bit of dried fruit - that's a conscious choice to have though - I like to know if I want to make flapjacks or similar, I've got the ingredients to hand.

Sometimes "using things up" can lead you to discovering new ideas that for whatever reason you hadn't thought of before. A few rashers of bacon fried and stirred into baked beans for example enlivened a standard jacket potato up no end. It's not that it's anything new or revolutionary, just simply that I'd never thought of combining the things like that that. That peanut butter has been added to Thai style veggie curries  - also using up coconut milk - to turn them into a sort of satay flavour - really tasty! I've also tried one recipe that I've talked about for ages and never previously got around to trying - Clafoutis - essentially a batter pudding, traditionally with cherries in it. We had a lurking can of black cherries donated by a friend who bought them then remembered she doesn't like cherries! A resounding success - and rather than a batter, as such, the recipe I followed gives almost more of a set custard. 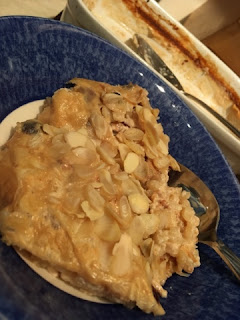 Rice pudding with dried cranberries added, finished off with flaked almonds on top to toast for the final 30 minutes of cooking was another success. Apologies for the shoddy photo. I was anxious to get on and eat it!

The reward for this effort is already starting to show, both in diminishing food cupboards, and in diminishing food bills too - so it's definitely working on all levels. I'll be carrying on for the foreseeable future as I work through things, it's requiring some thought when it comes to the shopping list as I have to remember to add those "storecupboard" ingredients that have already been used, but only in the quantity that they are required for the upcoming week's meal plan!