Not done one of these for a few years...I used to do one a week in the run up - back when I also blogged regularly while we we were up there. I love looking back at those posts now, but equally don’t feel a massive drive to go back to blogging daily while we’re there. Back when I first started doing it it was before all the cottages had WiFi, and the signal across the islands was generally still really poor, so actually finding somewhere I could post from was often an issue - there were a few cafes with WiFi that were happy for me to take a laptop in, and I knew a few spots in the right place to get a decent data signal via the 3 broadband dongle that I had - I’d load it up with enough credit ahead of the trip to allow for whatever internet we planned to use. 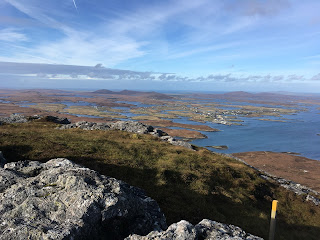 So - to this year’s plans then. Did I already mention that yet again our trip across is to be affected by ferry issues? It’s hardly unexpected these days - with an ageing CalMac fleet usually to blame, this time round it is the turn of one of the newer vessels to have suffered a catastrophic engine failure (that is Calmac’s wording, too!) taking it off the Ullapool > Stornoway run and into dry dock. But how does that affect us? I hear you ask....! Well....*takes a deep breath* this means that the MV Isle of Lewis - the boat that usually serves Barra (confused yet?) has been returned to her old route serving, possibly not unexpectedly, the Isle of Lewis. With no spare boat available, this in turn means that dear old MV Lord of the Isles now not only has to serve South Uist (our crossing of choice going over) but also needs to visit Barra on the way - this means a change of departure port from Mallaig to Oban (not altogether bad as Oban is a lot closer than Mallaig) but also a change of time to three hours earlier - and yes, you’ve guessed it, Oban isn’t THAT much closer! Thankfully we’ve managed to sort things out via an Airbnb booking rather further north than our usual overnight stop, and a planned early start from there to get us on our way in time. 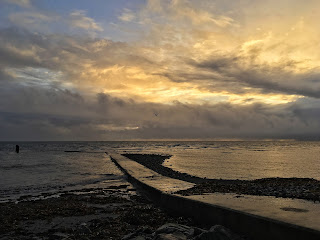 Accommodation wise we are back in the same location as the past few years “summer” visits - a now familiar little cottage on a wind blown headland. It’s such a fantastic spot we had no hesitation in booking there again - our third time staying there. Many of the “usual” things are planned too - some walks, possibly some hills although that might depend on how my poorly foot holds up. Lots of nice food (and beer!) and hopefully some good wildlife spotting. We also have our eyes on a boat trip - either with Nick who we’ve been out with before on the Lady Anne, or possibly in the rather faster vessels of the newer Uist Sea Tours guys.  All in all it is safe to say that we’re looking forward to getting back across quite as much as always! 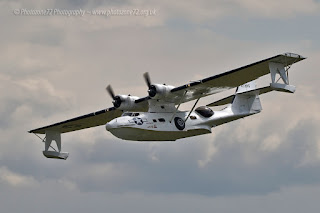 I'm pretty much still smiling after a fabulous day at Shuttleworth's opening airshow of the season on Sunday. Shuttleworth is a gorgeous venue - a real favourite of mine as you are always guaranteed an array of wonderful old aircraft including the warbirds I love so much. Also, quite often, you're guaranteed great company as well - and this time was no exception. Normally it's a case of rock up there and meet people, but because of the current restrictions around Covid-19 this time was a drive-in airshow so a little more logistically challenging, which is why 9am on Sunday morning saw myself, Max, Kevin & Sven, Richard, Mark and his Mrs (Wendy I think?) and Adam gathering in a car park on the outskirts of Biggleswade to travel in convoy to the show.

The organisation at the Shuttleworth estate was superb - a large holding area for those arriving ahead of the official gates open time, then well managed queues to the ticket gates and a special convoy system for groups of vehicles wanting to be placed together. People were also being very conscious about giving others space in food queues, and while generally wandering about.

Opening the show was the Consolidated Catalina in the photograph at the top - a stunningly beautiful aircraft. She'd flown in ahead of displaying so seeing her powering up and taking off was an additional treat. Next up was a series of flypasts by two of the Spitfires of the Battle of Britain Memorial Flight - one of the two flown by my pal Andy, who managed to multi-task what might be described as a "sporty" entrance, a cracking topside view of the aircraft AND a wave, all at the one time - impressive! 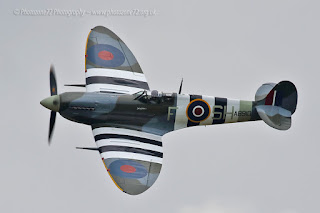 Shuttleworth has a big collection of resident aircraft ranging from vintage biplanes like this Gloster Gladiator... 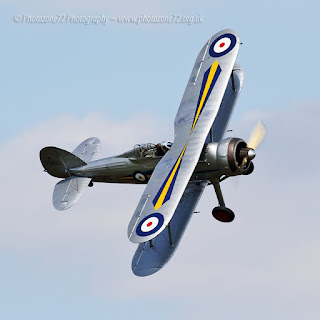 ...through to classic racers - including the immaculate DeHavilland DH.88 Comet... 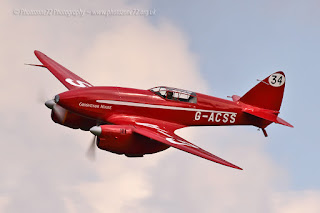 If ever an aircraft looked like it simply belonged in the sky, flirting with the clouds, then this is it. This particular example also has an illustrious history - winner of many air races in the 1930's, it also appeared as a static exhibit at the Festival of Great Britain in 1951. Above all it is just stunningly beautiful and a joy to see fly. THIS is what the Shuttleworth Collection does so well - taking classic aircraft and putting them where they belong - up in the sky.

Sunday was a brilliant day - great company, great aircraft, lots of banter...and if driving into the show and having to stay in our own little allocated areas by our vehicles is currently the way we can actually have airshows, then that's worth it to me. It was fantastic to spend time with good friends, and catch up with others who I'd not seen in ages. Max and I have already booked for another Shuttleworth show in a few weeks time - and it just feels brilliant to have airshows to look forward to again! 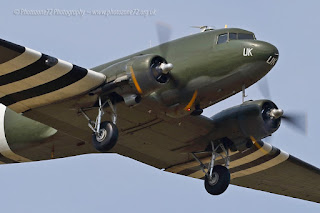 This week has felt like something approaching a bit of normality is beginning to creep back in. Firstly, I’m looking forward to my first airshow of the year at lovely Shuttleworth tomorrow - there will be brilliant people, and good banter, and biscuits (always biscuits!) and above all lots of fabulous warbirds to watch and to photograph. Bliss! Not the rather wonderful old girl above though, no, that shot was taken earlier in the week up at RAF Coningsby when I ventured up for a trip which I knew would include not only some BBMF flying in the shape of the Dakota pictured above, but also something rather faster, noisier and altogether whizzier... 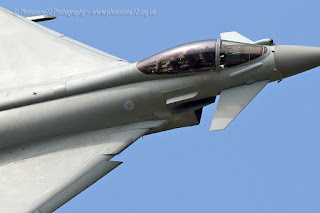 Yes - that’s the 2021 display pilot practising his display routine - and a first watch suggests that it is QUITE the routine, too! I was lucky with this sky too - the weather forecast said grey and overcast, but when I arrived in Lincolnshire there was a nice little patch of blue in not far off the right place, and sure enough it lingered around with some attendant sunshine for just long enough! 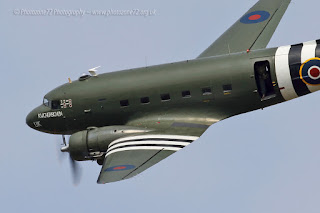 I’ve got a soft spot for the Dakota - often overlooked in favour of her more famous BBMF hangar-mate the wonderful Avro Lancaster, and I am nothing if not a keen supporter of the underdog as those who remember my speedway days will be all too aware of! The Dak is a beauty of an aircraft though, and with a fantastic history too both in military and domestic service. 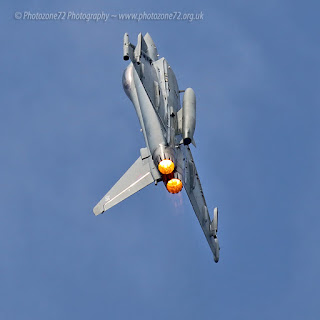 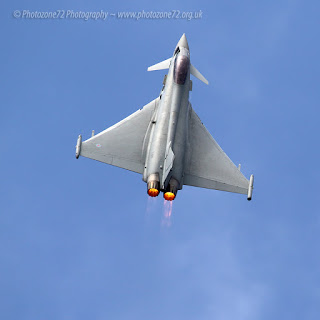 That blue sky came into its own when it came to perfectly showcasing the Typhoon’s exit from the display, too - the traditional exit when the conditions allow is a fast vertical spiralling climb - as you can see from the photos above this looks great when seen from almost directly underneath, and the blast from the reheat looks fantastic against that vivid blue sky, too!

Also in an aviation vein but slightly earlier in the week, we had an unexpected and very local visit from the East Anglian Air Ambulance too. 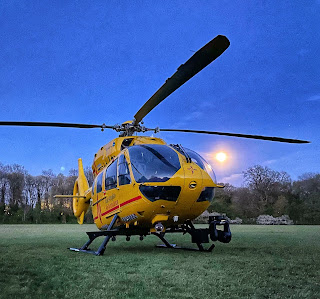 Sitting in the front room after eating our tea, we heard a helicopter passing over somewhat lower than we are used to, so I opened the tracking app to take a look - and sure enough confirmed that it very much appeared that the Eurocopter EC145 had just landed in a nearby playing field. We threw on shoes and jackets and walked through the woods to go and take a look. Thankfully soon after we arrived the pilot confirmed that they had been stood down as the incident was deemed not serious enough to require their team’s skills. We quite often see the Herts & Essex machine locally but very rarely this one - it was called upon because it was already in the air returning from a previous shout when the call came through for this one.

As if a LOT of photos from the Coningsby trip weren’t enough to be working on, I also ventured to Imperial War Museum Duxford for a brief visit yesterday afternoon. I have taken a year’s membership to the museum - in part because it includes free entry to the “flying days” they have planned and in part because it’s been such a difficult years for museums generally, and in particular those who rely on big events like airshows. It felt like an easy way of doing something - and gives me some benefits also of course, including the ability to just pop up there for an hour or so as I did yesterday. 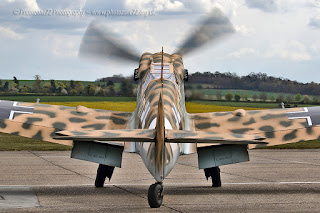 That is the Aircraft Restoration Company Hispano Buchon taxiing out ready for a run through of the display it will be performing at Shuttleworth - it’s a fantastic although slightly odd looking aircraft, but all those blurred edges on the camo pattern make it an absolute devil to photograph! There were also several Spitfires up and about so my trip up was very much worthwhile!

All in all, it has felt like a rather aviation-filled week, and with more yet to come!