It's to be hoped that by the time you read this, I will have no kitchen. Yes, I realise that sounds slightly odd, but finally, at LONG FECKING LAST, 13 years of planning to get our kitchen refurbed has become an actual event - so understandably we're quite excited! Rather as with the bathroom, we've decided not to take a "papering over the cracks" approach, but instead to literally rip it out and start again - so Dave-The-Builder is currently engaged in removing appliances, stripping out existing units, removing plumbing and stripping the walls and floor back to bare concrete. 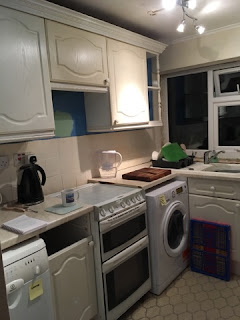 This feels like a far bigger job than the bathroom did - we actually surprised ourselves with that, while there was unquestionably a lot of upheaval while it was done, the actual process of deciding what we wanted, and getting that "want" transferred across into a design and then reality was relatively straightforward - the kitchen feels as though it's been anything but, however. I think part of the issue around this is that with the bathroom, we knew from the start that the layout couldn't change - so our only real challenges were how to make that prescribed layout work for us better - so things like the recessed shelving in the wall behind the bath so that shampoo bottles and shower gel no longer had to sit out on the edge, finding a vanity unit that would fit in a very restricted space yet still give us the look and increased storage we wanted, and coming up with a solution to provide some heating in what had, until that point, always been an unpleasantly cold room in the winter months. Even now, very nearly a year on, I still walk into that room and say "oooh!" and we still joke about having someone else's bathroom - it's just gorgeous, and worth every penny of what it cost us. 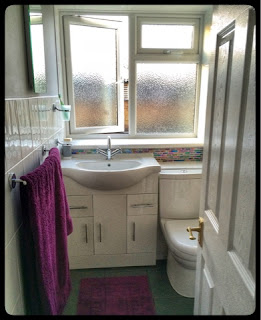 We spent what felt like weeks with the kitchen tying ourselves in knots trying to work out how we could change the layout, how we could make it all fit better, and finally, at the point at which we were tearing our hair out, we realised - the layout we had already pretty much works for us - there are small things we'd change, but ultimately we like the cooker sitting in the middle of the run of worktop, we like being able to stand at the sink and look straight out of the window, and we like the fact that the fridge sits behind the main bit of worktop we use for preparation, so getting things from it is as simple as turning round and grabbing them. The main downside to the room has always been too little worktop space - and a great big wasted space across in front of the window and in the back corner of the unit next to the sink, so that was the stuff we wanted to target. Overall layout though? Yeah. mostly pretty much fine. One we realised this our focus turned to finding a way of fitting in a corner unit that would give us access to the wasted space, and working out how the brick wall in front of the window could be "thinned down" - increasing both worktop & cupboard space AND floor area - something which can make a real difference in a small kitchen. The only real layout change was to move the washing machine to the opposite end of the room - it will now sit next to the door which is actually more practical - and this change is what has enabled our rather snazzy new "vario pull out" corner unit to be practical. 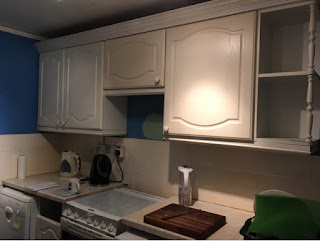 As with the bathroom, we've adopted an approach of finding best prices for things, and going with a budget option where it doesn't matter, but equally being happy to spend a bit more to get the finish we want, or to add little extras that will improve the way the room works for us and our own quality of life within it. The units are mid-range - but are also the nicest we saw, with a good quality finish. We could have spent more, but to be honest we didn't feel we'd gain from doing so. The floor tiles will be the same as the ones we used in the bathroom - and are coming in at under £100 for the whole floor. Similarly the wall tiles - we knew what we wanted, and when we found something that fitted the brief perfectly for 39p a tile, that was another decision made. We are using the tiles as a splashback including filling the space under the cooker-hood, which has saved us buying a separate expensive one - as our new cooker will have it's own glass lid over the hob which lifts to provide a splashback in any case, installing another one just felt like a waste to be honest. The interior of the larder is also being re-tiled - it's not on display and doesn't get seen by anyone other than us - so the most basic of square white glossy tiles will do the job perfectly. Total bill for all the tiles - wall, larder and floor? £188.00. Bargain. On the other hand we're spending a bit more on the cooker to get the one we want - although sticking within our restricted 550mm width, it gives more interior space on the oven than many of the 600mm wide options available. and also gives us two ovens as well as three different burner sizes on the hob. We could have got something that "would have done" for £100 less - but we use the cooker pretty much 7 days a week, so it's worth paying a bit more. Similarly we've gone with a "prestige brand" for our dishwasher. Electrical works will take up a good 5th of our budget - but at the same time they will also to an extent "future proof" us. Little extras like USB points in sockets, and a relocation  of the consumer unit add an amount to the cost but will also improve the look and ease of use of the place substantially. Lighting proved to be a real quandary until I asked a lovely friend for some input - he's a bit of  whizz with fitting kitchens having redone not only his own, but quite a lot of others, and he suggested using lighting above and below the units to give a gentle light throughout the whole room, and reducing the need for a top light - something which really appealed to us. We're also repeating the idea of using glass shelves with LED strips behind to project light into the room as this worked so well in the bathroom.

We're expecting a fair bit of chaos and disruption for the next few weeks, but we've planned easy to prepare meals for a few nights, and will probably take the approach of eating out or getting a takeaway on occasion when the mess all gets a bit much. We've factored in an increase in our food budget for the next few weeks as part of the cost anyway, as we always knew trying to prepare meals with the very restricted facilities we'll have was going to be a challenge, particularly as neither of us are a particular fan of processed ready meals. Anyway - watch this space - I promise to post an "after" for you as well - just try and stop me!