We've reached the mid season point in the UK airshow season and what fantastic weather we've had for it so far!

My season this year started at Shuttleworth in May - I was getting itchy feet and when someone mentioned the first of their "evening airshows" I couldn't resist getting started! As well as the usual Shuttleworth residents there was also a visit from this beauty: 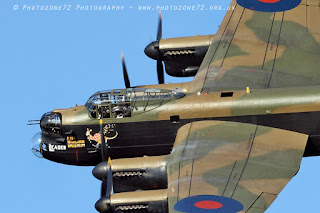 A few blank weeks after that as we headed off to Lundy with a big group of friends for a week (there is a blog post half written on that, to!) but our return to the mainland tied in nicely with the lovely Torbay Airshow - having attended their first show a couple of years ago it's become a bit of a favourite of mine so I was pleased to be able ton get there for a day again this year. It was also my first time this season seeing the Red Arrows display: 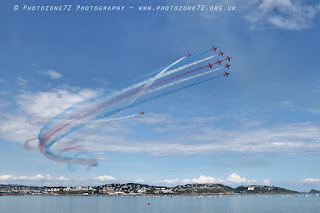 A lovely day in the sun with Maxine watching the flying, chattering lots and making the most of access to cheap ice cream!

From June things start getting busy as a rule - although I had made a conscious decision this season that I was going to step things back a bit simply because there are just too many things I want to cram into my summer" - still, Cosford was up next - one that I'd previously ummed and ahhed about doing, but this year the line-up made it an easy decision.

So many highlights it's tricky to know what to pick out but seeing these guys do their full landing display is also good: 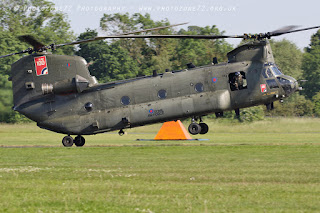 Mid month was the first Great Yarmouth Airshow - and I debated long and hard about whether to go or not. In the end I decided to judge it based on the weather, and as the date grew nearer the forecase wasn't looking great. Then a few days before a couple of this year';s Red Arrows Circus chaps started encouraging me to head up to Norwich to see them at the airport which was what I decided to do in the end. I was very glad I did too - thanks to the lovely Caz, and the kind chaps at Saxon Air, I ended up spending a full day airside with the team and the jets - which of course meant that this year's "Circus At Work" project is very much on! 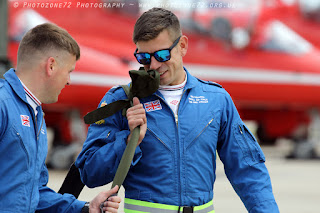 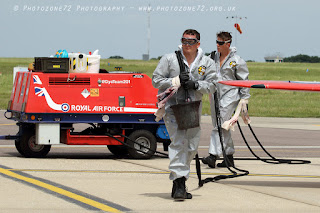 Another trip to Shuttleworth followed - warbird heaven! then into the "big" shows again with Yeovilton arrivals and the show itself. The arrivals day there has proved to be a really nice chilled day and for its £15 price tag, great value too, so friend Gary & I pitched up on a blazingly hot sunny day before being joined by Kim & Jade the following day for the show itself. The absolute highlight for me was finally getting to see this for myself: 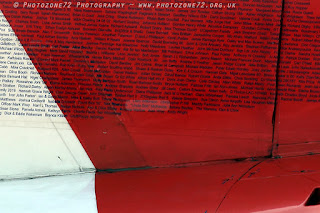 My much loved and missed Uncle Bob's name on the tail of RAF Red Arrows Hawk XX322. Thanks to the fundraising "Names on a plane" scheme Bob had been whizzing around the skies of the UK and beyond since last season but for various reasons this was the first time I'd got to see it up close. There was a shriek, and then a tear or two when I realised it was visible - very emotional indeed and I just know how excited Bob would have been at this!

Flying highlights were probably the Belgian Air Force F16 display I think - with their stunning "Dark Falcon" scheme complete with the additional of flares for this display: 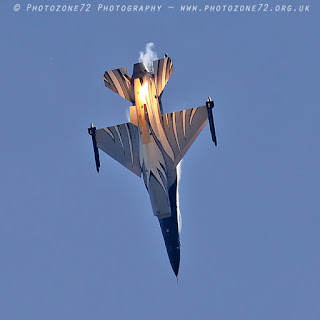 The following week was of course the biggie - The Royal International Air Tattoo at RAF Fairford - a great three days of incredible displays but most of all the years best chance to catch up with oh-so-many great friends that you simply don't see enough of! So many highlights on the flying front - the RAF BBMF's incredible "Trenchard Plus" display where they got all the toys out of the toybox to fly: 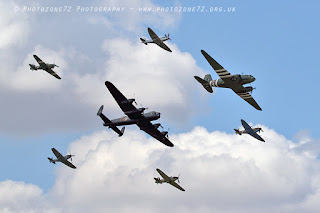 Awesome is a much over used word but this really was. See also "emotional". Very very special indeed - I'm incredibly glad to have seen it for myself. Another "Special" was a 617 Squadron Formation with the BBMF Lancaster, the Panvia Tornado and "new kid on the block" the newly arrived to the UK Lockheed Martin F35b Lightning II. 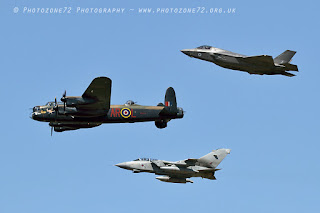 Spectaular and another great tribute to both the #RAF100 anniversary and the anniversary also of the Dams Raid, of course.

This end of the season got wrapped up with a visit to Farnborough. Now this is a show I've never been sure about visiting - tickets tend to be on the expensive side and the public days at the weekend are often said to be not great. However, the draw for me was that they had secured a Spanish Navy Harrier jump jet - and this one was going to be FLYING! The decision was made and I duly met up with another pal - Simon - shortly after bacon butty time for a good old wander about the show. We found the prototype model of the newly announced RAF jet the Tempest which was interesting, then  separated for a bit to find our chosen spot top watch the star of the show: 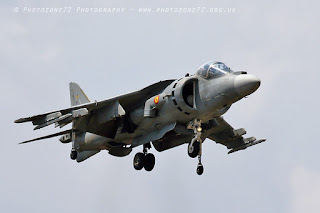 What a star it was, too! I'd forgotten how unbelievably loud these are! Thank goodness for earplugs - they really were much needed! She flew, and she hovered and yes I confess that it must have got quite dusty as I definitely had something in my eye! In spite of not being greatly impressed with the rest of the show, this was actually well worth the ticket price, for me. Probably not a show I'd got back to though, on the whole.

So next up for me after mid season break will be Eastbourne - this is one for the "usual suspects" gang - Claire, Anthony and I are all in the same hotel I believe, and Tom & Alysha are staying elsewhere in the town. Lots of other friends will be about as well so it's going to be a sort of combined mini holiday and big get together, hopefully! Planning is happening apace and we're all thoroughly looking forward to a great few days! Bring it on!

Robyn
Posted by Robyn at 4:32 pm No comments: