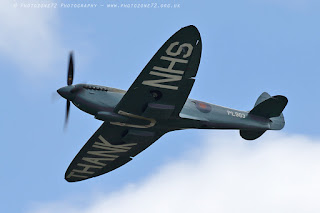 A message arrived from an aviation friend last night with a screenshot drawing my attention to the fact that the "NHS Spitfire" - the aircraft that ARCO at Duxford have painted as a tribute to the NHS heroes from the Covid-19 crisis - was going to be local to me this morning. Extremely grateful for this as it had completely passed me by that it was flying again so soon! To my delight I spotted our local airfield - North Weald - on the location list, how exciting!

MrEH and I went for our walk as usual first thing then on return I grabbed some toast for breakfast, and my second brew of the day, wouldn't do to miss that, before picking up the camera kit for the second time this week and heading out. On arrival there were a fair number of folk about clearly all there for the same reason I was, but parking was easy enough thanks to lovely Wings Cafe / Weald Aviation allowing use of what would usually I believe be their staff parking area. First off the Air Ambulance was powering up  - we did briefly wonder if they were about to go on a shout which would have been ironic timing considering that the Spitfire Flypast was specifically for them! Fortunately though it turned out to be just a ground engine run which is always nice to see. Next the arrival of an ex Army Scout Helicopter was a bit of a treat - it flew in, hover-taxied to just in front of where I was standing, then subsequently hover-taxied again to relocate slightly, giving plenty of time to get some photographs of the first classic aircraft of the day!  Then the speculation about which way the Spit would appear from began amongst those present - we knew where it was coming from, but allowing for the need to present an underside at some stage, plus the proximity of the M11, it was none too certain that it would actually run in from that direction, and sure enough when the chap next to me said "I can see it - just above the white clouds there" it was from a trajectory which would allow it to cross the motorway at a right angle. One run round presenting the topside, then a circuit back to pass again this time allowing a short banking maneouvre to show the "THANK U NHS" message on the underside. A quick wing waggle and on to the next location (or not - as it seems it managed to miss out our local hospital entirely and head straight on to Hertford - oops!) leaving behind it the lingering and distinctive sound of a Merlin engine, and lots of smiling faces!

As it always the way with aviation enthusiasts conversation kicks off quite naturally and before too long the rumours start passing back and forth - and it was of no surprise that before too long someone revealed that they had heard that the Douglas Skyraider parked outside the Heritage Hangar was being strapped down for an engine run, and those still hanging around ambled in that direction to watch the action. The more optimistic tried to get a little closer than advisory and had to be waved back - while those of us who have experienced this sort of thing before tucked ourselves into positions where we and our camera gear would not get utterly pelted with any debris thrown up by the wash from the powerful engine! After just one false alarm the engine fired up - hesitantly at first, and then with a more confident roar, and we were treated to the sort of full power run where the very ground under your feet thrums, you can feel the bass note of the engine through your core and you can sense the desperation from the aircraft to hurl itself free of its restraints and launch itself into the sky - just beautiful!

Above all the best thing about this morning was just how normal it felt. Sure, social distancing was being observed, but in real terms that involved little more than giving others a courteous level of personal space, and it just felt so nice to be over at North Weald with the camera again as I have been so many times pre-Covid, having conversations with like minded individuals and seeing some beautiful aircraft. For a couple of hours, being able to set aside all the concerns and anxieties of the past few months, focus on camera settings, exchange stories, chat with like-minded individuals was just a joy. May there be many more days like that to come!

Sounds like the perfect way for you
to spend a happy morning! xx