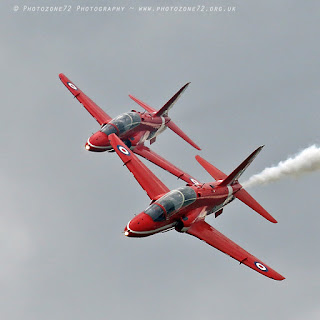 Finally got to my shots from Tuesday’s Reds Display practise at Scampton - not too many that I’m happy with, but allowing for the grey overcast conditions I expected that. I did get the shots I wanted of the two jets running in for the Gypo Pass though - and one of those is above.

Back at home, we’re starting to prepare to hopefully get to the Hebrides before all that much longer - ferry tickets are now booked thank goodness, and circumstances actually mean we get an additional day and a bit over in Uist this year as well - our usual ferry crossing is not available, and because of the limited capacity on the ferries at the moment we decided we’d make “plan A” the day earlier, rather than running the risk of actually losing a day or more of our holiday. Thankfully the booking went smoothly, and we have secured accommodation for the additional night also - wonderful! I really feel as though this trip is needed now - although I’ve been furloughed from work since April, and MrEH has been working from home, we’ve not actually taken any holiday time at all this year yet - everything that we did have booked was cancelled of course, so a few weeks away will be just perfect.

I also plan to get back into the habit of regular running again before we go away - I have another virtual challenge coming up and plan to run an 80km month later in the year - more than I have done for a while so I want to get back to the routine of it beforehand to prepare. I also hope to do some of that mileage in the Hebrides too - I love going there with a challenge to work on as it’s such a fabulous place to run! I went out today for the first time in a couple of weeks - just 3 miles, a reasonably paced first mile, a far slower second one, and then some speedwork mixed into the third for good measure - I’ve not done speedwork in a fair while so that was long overdue. The plan is to try to throw some in once a week from now on - but we’ll see how that pans out! For now, it’s back to the old routine though - 3 runs a week, that pattern works. Time on feet, build the miles up gradually. Time to make it happen.