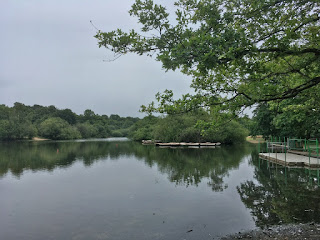 I had to drive my Dad to London again today for another appointment - so decided to seize the chance to fit in a run around the lake that I frequently run round after work in more normal times while I was waiting for him. My Garmin chose not to record it properly - although the run log is there on the watch, it refuses to transfer to the app. Sigh. I confess I had to talk myself into this one - my motivation to run has been back to rock bottom again all week, and running had turned into something I “should” do rather than something I wanted to do. Today, with the lure of a nice location and some water to run round, it became something I wanted to do again. Drizzly rain put a bit of a dampener (literally) on things, but I managed to get 2 laps round in before it got heavy enough that it became unpleasant, and I made a dash back for the car. And yes, I did feel better for it - movement is a wonderful thing!