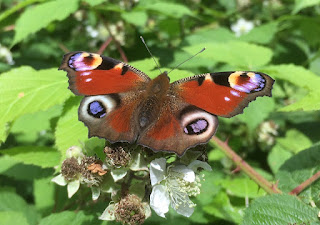 We are starting to plan some more sociable events. I have a night away from home staying with a friend imminent, to do some remarkably “normal” aviation photography stuff. Our Zoom chat with the gang yesterday included some discussion about trying to all get together somewhere fairly central to everyone for a weekend at some stage before too long, although a lot will depend on the rules being relaxed to allow more than two households to congregate together outside at least.

Shuttleworth have announced a “drive in airshow” for a couple of weeks time - the premise being you are allocated a 5m x 5m parking bay, and aside from use of toilets etc you aim to stay within that bay. A good idea, although for me the £50 per car price tag makes it unjustifiable for the line-up of aircraft displaying. For a family of 3 or 4 though this would be a decent deal. Although MrEH would come along with me, he’s not really interested in the flying aside from the Edwardian stuff which might fly, but might not, depending on the weather. If they had involved some of the aircraft from nearby Duxford in the line-up too I would very likely have felt it was worth the money, but as it is, I’m going to swerve this one I think.

It is beginning to look optimistic that we might be able to visit the Hebrides for our deferred holiday later in the summer. It may have to look rather different to normal, with face coverings being mandatory in shops in Scotland from next week for example, MrEH may find himself doing rather a lot of shopping on his own as I cannot currently wear face coverings, and I think I would feel uncomfortable explaining that I was exempt in that circumstance. The Ferry is easy to deal with so long as I can wear a covering for long enough to get from the car to the outside deck, we tend to sit outside in all weathers anyway! This is the first time since rearranging things that I have actually begun to let myself feel even slightly hopeful about this, and after what has been at times an incredibly difficult few months, that trip has never been more needed, so hopefully we will not have to face disappointment again.

On a less cheerful note an interaction today has left me questioning my continued participation in  a group of which I am part. A message received from a member of that group this morning blaming me for something which patently could not have been my fault, in really quite unpleasant terms left me literally feeling sick and shaking, a feeling which has still not entirely subsided. My first reaction was to lash out in return, and make clear how hurt I was, but I am grateful that I surprised that initial urge and instead reply relatively calmly - pointing out that their comments were uncalled for, and clarifying something else they have accused me of. I know need to establish in my own mind where that leaves me in our social group - although I have in the past proved that I can step away from a group when one members’ behaviour makes me feel I no longer want anything to do with that person - in my experience those friends worth retaining find a way through, those who are not, don’t, so I’m actually not as alarmed and worried about the thought of no longer participating in that group as I would have been. This is not the first time the person concerned has chosen to take something I have said as a personal attack on them, and also not the first time that they have apologised in the terms and with the same mitigation that they have today. While it would appear that they may not have learned from that first experience, I definitely have and will not be opening myself up to the same treatment being meted out again. I’m worth more than that, and also need to be mindful of my own mental health - dealing with situations like this morning provides all the triggers I need to plummet into depression again, but being aware of his means I can take hopefully steps to guard against that. Self care, or self preservation - call it what you will!

Boundaries are important, for self esteem and for mental health. I walked away from a Scrabble group because one person was sniping at me. I agree it's about deciding we're worth putting those boundaries in place. Good mental and emotional hygiene! As the saying goes, the people who matter won't mind, and the people who mind don't matter. Whatever you choose, when it's from a position of self kindness and compassion, then it's almost certain to result in your own best interest.

Groatie, That is very probably one of the most thoughtful, considered and downright sensible comments I have ever been left! Thank you - you have no idea how much I needed that reassurance right now!