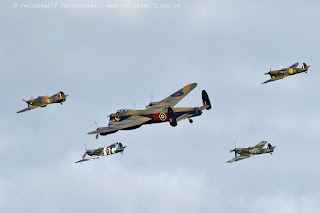 I was originally planned to head up to RAF Coningsby yesterday until receiving a message earlier in the week saying to make it Friday instead. Unfortunately that also came with a change of time from middle of the day, to first thing in the morning...ugh!

So, fast forward to this morning - 5.20am and the alarm went off, out of bed, kettle on, wash, dress, tea made in my trusty insulated mug, and into the car 2 minutes later for the 2 hour plus drive to Coningsby, home of the Battle of Britain Memorial Flight. It was the first time I’d made it up there  since last autumn - BBMF don’t start their display season workup until March at the earliest as a rule,  and with lockdown kicking in when it did there was no opportunity to head up there until now.

Just before 8.30am the wonderful sound of Merlin engines filled the air and the Lancaster, Hurricane and three Spitfires took to the sky. With this year being the 80th anniversary of the Battle of Britain a special formation was the order of the day to start things off - with all 5 aircraft joining together. Always a treat getting to see these wonderful warbirds displaying in a bigger group than the standard 3-ship and today was no exception! The formation then split apart into its component parts with different aircraft performing their separate displays - all in all best part of an hour of flying to photograph - bliss!

The photo above shows the Battle of Britain anniversary formation - known as “Dowding Formation”, hopefully we’ll get to see it displaying elsewhere at some stage before the end of the year, although that remains to be seen!