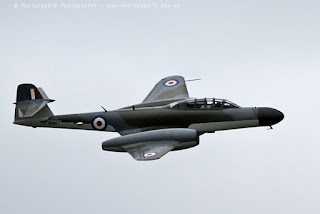 Spent a chunk of today looking back at some old aviation photos again - from Cosford Airshow 2015. For a while now I have had a feeling that there should be a fair few shots there that I’d never got around to processing first time I went through them, and sure enough the first ones I found were a load of the fantastic Gloster Meteor - a jet we haven’t seen displaying since the tragic events at Shoreham later that same year. I think there can be very few of us aviation photographers who wouldn’t love to see a Meteor flying in the U.K. again - I know I would! 2015 was also the last time we saw a Vulcan bomber fly as well of course - and that is one aircraft we will almost certainly never see airborne again.

As a further “throwback” this afternoon I had volunteered to drive my Dad into London for an appointment - in the interests of not risking being late, we got into Walthamstow with half an hour to spare, so took a little drive around the area that Dad grew up in to full some time. I think he was pretty astonished by all the changes - I have been round the area on a reasonably regular basis since we moved away in 2003, and even for me I find it quite strange going back to an area that is quite so different now.

MrEH and I made the decision to move out of London at the point where we wanted to buy somewhere to live - realistically we would only have been able to afford somewhere absolutely tiny in London at that stage, and moving out just a few miles meant that without over-stretching ourselves financially more than we felt comfortable with, we were able to buy somewhere of a far more practical size. For me it was a huge decision - a Londoner born and bred, I had never lived anywhere else, or indeed wanted to! Going back now is strange - and although there are areas of London I would like to live, there is no prospect we would ever be able to afford even those places where frankly we wouldn’t be caught dead!