A meander south from the town and across to Epping Green, and Nazeing Common for us today. A proper mixed bag with weather too. First it was cool and overcast, then blazing hot and sunny, and then cool and spitting with rain! Just one real downpour though and we found a nice densely leaved tree to stand under for that one and didn’t get so much as damp! 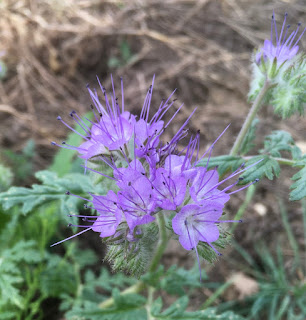 For some reason we’ve not really been south on our walks very much - early on before we discovered so many more paths to walk there was a perception we’d have to walk a lot of roads before we got anywhere interesting I think, and then we sort of forgot about it. Today proved once again how easy it is to walk around our area with very few roads involved - just a couple of short stretches of country lane today. 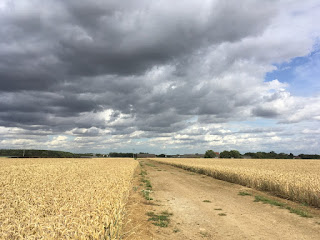 This was not the clouds that threatened to drench us, oddly enough! I do love a nice weather contrast photo though, and this one ticks that box beautifully😉! Mostly it was ideal walking weather today though - not too warm or too cool, and a nice breeze just to keep things pleasant even when we would otherwise have been hot from just moving. 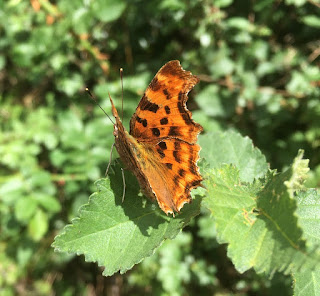 Again we saw masses of butterflies today - including this lovely Comma - I love them with their vibrant orange colour and pretty scalloped edges - such a showy little thing! 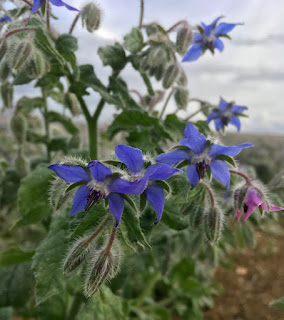 This plant is also a familiar sight in this part of the U.K. at this time of year - it’s borage, and it’s striking flowers create a sea of blue across many Essex fields at the moment, we walked throuh a LOT of it today where farmers had failed to keep footpaths clear - and ai discovered that those hairs in the stalks are also quite an irritant. Pretty to look at, but I’d as soon not have to wade through it again, thanks! 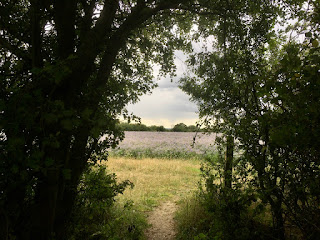 And the photo above gives an idea of how it looks when you glance through a gap in a hedge and see a field of it on the other side! (We met a rather lovely black spaniel though there too - always a bonus!) 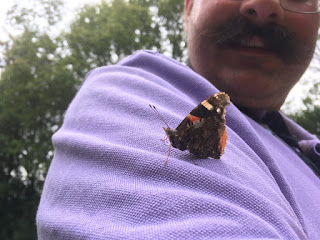 Finally another butterfly - this Red Admiral landed on MrEH’s arm and declined to move for a while. I remember these as being quite rare when I was a child - My Nan was always hugely excited to see one - although we see them quite regularly these days I still retain that excitement even now!

The afternoon was rounded off rather wonderfully by seeing two of the Battle of Britain Memorial Flight aircraft flying over Harlow as we walked back towards home. The Hurricane and Spitfire were on their way to join up with the Lancaster to carry out a flypast over London and I had been watching all three aircraft on the tracker to keep an eye on their line - initially we thought they were going to be too far west of us, but they turned to the East at just the right moment. Hearing a couple of Merlin Engines passing overhead is always a treat!