The thing about running... 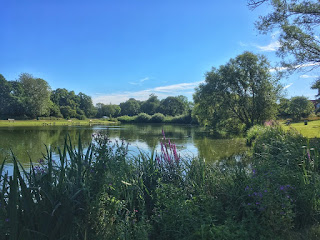 ...is that sometimes it’s really good fun. Tuesday was a good example - 2 miles, pretty hard work, definitely pushing myself, but in spite of that, I really enjoyed it. Other times though, it really isn’t - and today’s run was a good example - best described as HORRIBLE!
It was warm when we went for our walk first thing - temperatures up up to 30C were promised for the day but the forecast suggested it would be after lunchtime when that really kicked in. Even at 8.30 though, there was never any question I needed anything other than my running kit on, and even just in that, it was warm. We walked - 3.5 miles this morning, across to the pond (above) where to our delight we spotted a Common Sandpiper, our first of the year and a fairly unusual sighting for our little town, then home, MrEH settled down to his work day and I grabbed running belt (keys, phone) and Garmin and headed back out again.
Almost immediately I knew it wasn’t going to be one of those fun ones - the heat had picked up even more, my legs were saying “no thanks” within the first five minutes, and I am in the middle of one of the energy slumps I still get from time to time as well. The first mile was OK - on the route I ran today that first mile is entirely downhill so pretty much guarantees a decent pace. After that though things got less pretty - I’m not a fan of hot weather running at the best of times, and today was NOT the best of times! At a mile and a half I passed the first of my “get out options” - places where I could simply loop back towards home for a shorter run - the temptation was strong but I dismissed it and carried on - probably walking more than running by that stage. At just short of 2 miles I gave myself a talking to and switched to structured run/walk pattern. Another couple of “get out options” came and went. By the time I reached just short of 3 miles I was overheating to the point of feeling sick, my breathing was wheezy and it had really stopped being any sort of enjoyable - in spite of wanting 4 miles ideally I decided to just stop the Garmin and walk home - sometimes you just need to know when you’re beaten.
There are always positives from a run like that - today’s were; that I didn’t bail at any of the places I could have done, 3 miles is better than no miles, and it was time on feet (and still 4 miles with the walk home!) - and time on feet is good. Runs like that just happen sometimes - there’s little you can do to predict it and in fact this morning I was actually quite fired up for my run - all you can do is learn from it, and file it away under “next time will be better”. Hindsight being what it is, I should have run the final mile as a “walk the uphill, run the down” but we all know what they say about hindsight!
So - learn, move on. One more run to do this week, and I will probably make that trail centred I think, and probably on Saturday when temperatures will have dropped a bit. That one will be better - well, it can’t be any worse!
Robyn
Posted by Robyn at 6:55 pm