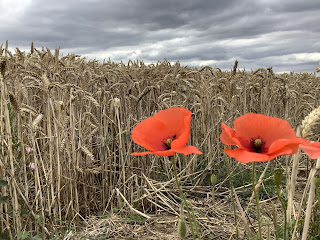 Each time we go to the Farmers Market, we park (with permission!) in the car park of the village pub. Yesterday, MrEH suddenly said “you know, we should walk across here for a beer tomorrow, to give something back for the use of the car park for all these years!” Now those that know me will be entirely unsurprised that I didn’t disagree in the slightest with this idea - so late morning today we wandered out to do exactly that.

By road, Matching Tye where the market is held is only 4 miles away, but naturally we had no wish to walk any more of it on the roads than we had to, so a nice circular route was worked out returning via a field a couple of miles from home where we happen to know there are plum trees... first though, the way there. Once through a Newhall - the slightly odd new develop,ent on the outs kit parts of Harlow that ai have written about here before, it was retracing steps from a route we walked in the opposite direction on one of our first longer walks at the beginning of lockdown - over the motorway, then across to the village of Hobbs Cross before continuing on a short stretch of road then off across fields again. Some gorgeous views... 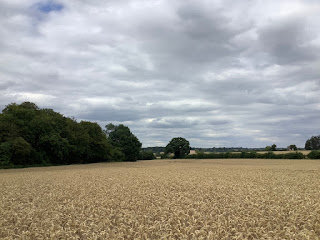 ...albeit a rather more cloudy day than we might have hoped for mid July! Our plan had been to just have a beer or two at the pub, but a quick sneaky peek at their menu indicated some rather tempting sounding sandwiches, and more importantly cheesy chips, so we decided to have lunch too. (Get us - lunch out, just like the olden days...!) The beer was a choice of Sharps Doom Bar or Greene King IPA - not exciting options but both (he had the GK, I went for DB) were well kept and perfectly drinkable, and the food was delicious.

A brief burst of excitement on the way back as we spotted a striking small mainly yellow bird sitting among the crop in a field. Yellowhammer? Nope, wrong bill shape. That also ruled out Siskin or the rarer Serin - but we eventually realised that in spite of the completely wrong habitat what we were looking at was a Yellow Wagtail - a lovely and unexpected surprise. 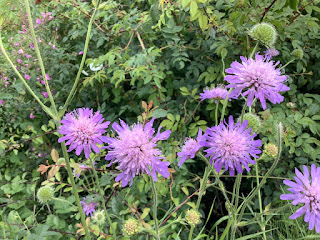 Masses of fantastic wildflowers everywhere still as well - the last of the poppies, yellow agrimony, field bindweed with its little pink & white  striped flowers, some of the orchids we found close to the motorway the other week, and various other things including the blue beauties above - not sure what they are as yet but MrEH is looking them up as we speak. Also plenty of butterflies still - countless Large White, Gatekeeper,  Speckled Wood, as well as the tiny orange skippers, and the odd Ringlet, Red Admiral and Peacock.

Onwards towards home then - over the motorway - FAR busier again now... 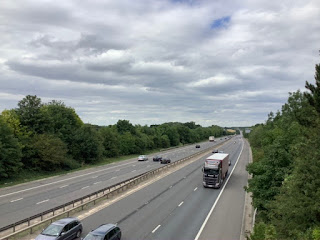 ...then to the field with the plums....some, but not that many yet, we’ll return again in a week or so. A good 10.5 miles in the end though - the longest I’ve done in boots for a while, but with (hopefully!) our Hebrides trip not too far away in the horizon, I need to get my feet used to wearing them again.

Now to turn thoughts towards the week ahead. Possibly another aviation adventure - that is TBC at the moment. Other than that though nothing specific planned - let’s see what happens!