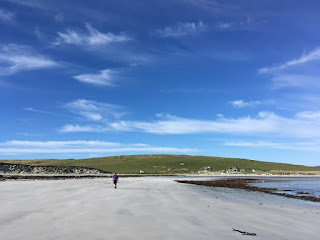 Transition to the new Blogger interface has happened - I was reverted to it a while back and it quite simply didn’t work at all on the iPad - on the odd occasions it would let me make a new post at all it was impossible to post photos, and as we all know this blog rarely has a post without a photo! So after a few days of trying, failing, and using the old interface anyway, I eventually switched back for as long as it would let me - and that time has now come to an end it seems, time to do battle again!
First reactions are good - the new post button appeared straight away this time without needing the repeated refreshes that were needed last time out. Posting a single photo too is now seamless - which is a relief as it was the main thing I was worried about. Fingers crossed this is a good sign that the earlier niggles have now been fixed.
And now for the reason behind today’s choice of photo - which you will have spotted is a favourite Hebridean beach. The balance for our upcoming trip is now PAID and I’m finally starting to believe that we might be going! Ironically we have now been told that a Friday ferry crossing has been reinstated on our usual route over, obviously that has happened AFTER we had booked our crossing! We’re sticking with what we have booked though - ultimately it gets us another day across there, so why would we not?! (As “downsides” go, that one is none too bad!) Although we were only across last at Christmas, this trip feels like a long time coming having had to deal with the disappointment of the postponement in May, and I think it’s safe to say that we both really need a couple of weeks to just switch off and relax.
Something I have been saying almost since we started going across to the Hebrides for a fortnight each year is that I want to spend a good chunk of one day just sitting on a beach with a book with no pressure to do anything - and I’m determined that this is the year it will happen. What tends to happen once we’re there is that each time a day comes along where the weather would lend itself to sitting on a beach, that weather also lends itself to a walk up a hill, or an explore of another island, or whatever. The feeling that we must be making the maximum use of all our time is always a strong one, but this time round I think we also need more than anything else to thoroughly relax. I’m not a sunbather by any stretch, but I can very happily spend a day on a beach with a book, a bit of paddling, maybe a game with a frisbee, or possibly a fly of a kite thrown in....well, as long as the thought of  a walk up a hill, or an explore of another island, doesn’t get in the way, that is!
Robyn
Posted by Robyn at 9:37 pm