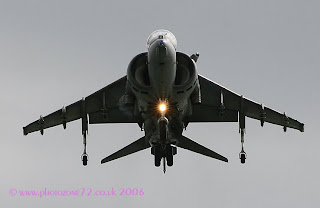 .....To the Harrier Jump Jet. This special plane has today flown it's last operational flights for the British Military forces. It was only a few years ago that this plane was a regular on the air-show circuit, wowing the crowds and making small children cry and dogs bark with the phenomenal roar and downdraft as it went into a hover. It was always forgiven though when it "took a bow" at the end of the display, and its ability to do something (vertical take-off, and that hover) which is usually associated with a helicopter rather than fixed wing aircraft made it extra special.