We've just spent the weekend in Norwich at the Campaign for Real Ale's annual Members Weekend and AGM. We're what's known as "Active members" of the Campaign - volunteering at the National Beer festival each year (now relocated back "home" to Olympia) and also in advance of the festival at working weekends. There are plenty more active than us mind - many folk out there travel around the country doing festival after festival through the year - and taking part in things at local Branch level too - our local branch stuff is tricky to get involved with due to the times of the meetings being difficult for us, but we are looking to see if there is anything we can do about that. All staff at CAMRA beer festivals and within local branches are volunteers - and the campaign has an astonishing breadth of knowledge and experience within its membership to enable this.

So, Norwich - we travelled on the train on Friday afternoon, tickets booked in advance as ever to get them as cheaply as possible. We'd also booked a nice central Travelodge on a cheap rate nice and early on too, although for the first time ever we nearly fell foul of their habit of overbooking, as we got an email from them that morning asking whether we were definitely turning up. We fired off a response saying that we most certainly were and all was well when we checked in - friends though arrived later in the evening to find that their booking had had to be transferred elsewhere. 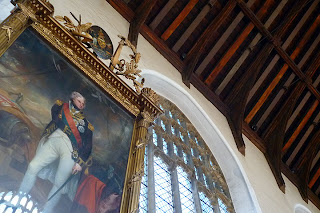 The AGM was being held in the beautiful St Andrews & Blackfriars Halls - the same location for the city's annual beer festival so it was a venue we knew. The weekend runs from Friday to Sunday, although the official AGM business is taken care of through the day on Saturday and on Sunday morning - Friday evening was all about catching up with many many great friends and sampling the excellent range of beers in the members bar - effectively a beer festival held just for those members attending, there is no public admission at all to this one. People come from far and wide to attend - we knew people there from Scotland, Wales, the Isle of Man and the South Coast, and all points in between, but members even travel from the continent too, and there have frequently been attendees from the USA and other countries. 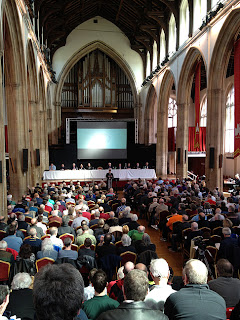 We spent most of the day on Saturday in the hall listening to the various debates and presentations on all aspects of Campaign business - some very interesting, some rather less so - but that is the way of such things! A speech from Community Pubs Minister Brandon Lewis MP was interesting to hear, and he also took a question an answer session afterwards. Once "business" was declared closed for the day we took the chance to pop out for a bit to get some air, and some sunshine (and some cake!) and sat with a cup of tea on the stone "terrace" overlooking the market for a while - lovely and colourful! A return to the Members bar and a bit more catching up with folks followed before we headed off with a group of pals to visit some of the local pubs. 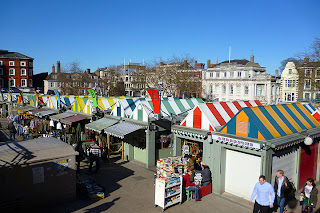 Sunday is a much less formal day - our "National Executive" (Board of Directors, effectively) had all ditched their suits and ties and were dressed casually up on the platform - with many a loud shirt and pair of shorts to be seen on the chaps - and the atmosphere in the hall is far more relaxed and jolly too - having had a slow start on hearing the Motions to be put to conference on Saturday morning, they fairly rattled through them yesterday, and everything that was programmed was heard. Once the final Motion was voted on Chairman Colin wasted no time in declaring the business of the weekend closed and releasing us all for some final chat ahead of goodbyes as we all scattered...Norwich Station looked like a giant CAMRA meeting for much of the afternoon!

We'd not attended an AGM for a fair few years for various reasons but with this years being held in our "home patch" of East Anglia it encouraged us to return. As we rather expected it was a thoroughly enjoyable weekend - always nice to meet up with people anyway, and as we would sometimes only see some of these folk once or twice a year it was great to have the chance to spend some proper time chatting and catching up. Next years will be held in Scarborough and we've already pencilled the dates into our diaries!

Are you a member of any large organisations that do this sort of thing, or are you involved in volunteering for anything on a local or National level?

I would have liked to have heard about community pubs; I was once involved in trying to set one up. CAMRA has always been such an important source of information on the health of pubs nationally.

One of the things that was raised in general debate was how CAMRA can be more visible in the media - as things stand we get trotted out when something "big" occurs, and of course we got a LOT of good press about the removal of the Beer Tax Escalator, but on a day to day basis there is very little visibility.