As some of you know, I'm fortunately enough to work a four day week and have Fridays off. During our working week Mr EH and I both take fairly straightforward lunches - a filled roll, some fruit, and he usually has a bag of crisps. On a Friday though it seems silly to make a roll for myself when I'm going to be pottering about here, so I generally end up making my lunch on Friday a "use things up" meal. It can be anything from a bowl of soup, to some toast, to the remains of the previous night's dinner, but one thing that does seem to come up repeatedly is "Pasta & Stuff" - which to be fair is probably a favourite in most folks houses!

Last friday I started with the pasta - we have a glut of spaghetti following a bit of a cock-up on the pricing/special offer front a while back at that sometimes-mentioned supermarket beginning with the same letter as "tomato" - if they're going to pay me to remove Spaghetti from there store, then I'll buy spaghetti. *grin* Once that was on to boil, I turned my attention to what else needed using up. The last two rashers from a pack of bacon were chopped up and popped in a pan with the final few drops of Garlic infused rapeseed oil from the bottle we bought at last year's Good Food Show. 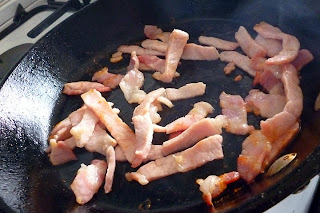 A further rummage through the fridge revealed the final three tomatoes from the previous week - soft but still delicious - and just the perfect match for some of the Greek Basil I bought for 19p a couple of weeks ago... 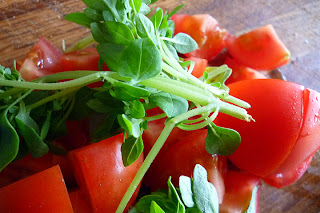 and the final couple of handfuls of the bag of rocket I'd bought for salads - accordingly to it's "best before" date well past it's best, but still looking very crisp and fresh to me... 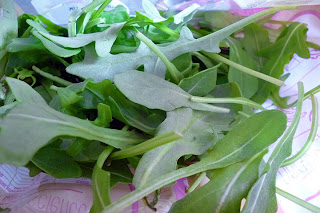 Prep was dead easy and simple - another "must" for a Friday lunch! I cooked the tomatoes with the bacon, stirred in a spoonful of a soft-cheese I got free in return for doing a product trial on it, and then poured the lot over the cooked pasta along with the rocket and basil. Tossed it all together with a couple of spoonfuls of the pasta water just to loosen it slightly, and shaved a little parmesan over the top. 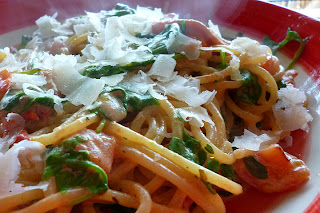 It was every bit as delicious as it looks! I love meals like this, and the "real" cost was pretty much nothing. being self-employed, not working on a Friday also means I'm not earning, so I do always feel that my running costs for the day should be as low as possible!

That looks soooo good! I used to love bacon in pasta dishes, and a small amount goes a long way doesn't it? Simple, nutritious and delicious - it doesn't get any better than that!

It really does - the better the bacon, the less you need, too! I love a cauliflower cheese style dish with a little bit of bacon cooked in with the sauce too - adds a real depth of flavour and you hardly need any bacon to have the effect!