...finally, 13 years after moving into our flat, we took the plunge and got the bathroom sorted out. when I say "sorted out" - the builder who did the work asked on arrival exactly what we wanted done and the answer was "everything" - so everything it was - quite literally floor to ceiling and even most of the walls. 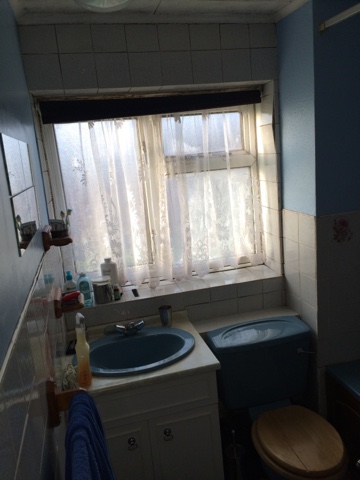 The issue we had with the bathroom from the start was that while it wasn't to our taste (far from it, in fact!) it was liveable-with. Once we'd got the previous occupants' years of neglect off the toilet, basin and bath that was. Even when the floor developed a hole, we learned to step over it and walk round it rather than be brave enough to actually commit to doing something about it. Over the years we've gradually put together ideas, thoughts and plans. That bathroom has been on our "to do" list for a VERY long while, and finally after a chat with a lovely friend a few months back (his take on it was "for goodness sake just DO IT - you'll talk about it forever!"), we took a deep breath and put the wheels in motion, getting the lovely Dave-The-Builder (he SO should have been called Bob!) to come and look, and quote, and then go ahead with the job. 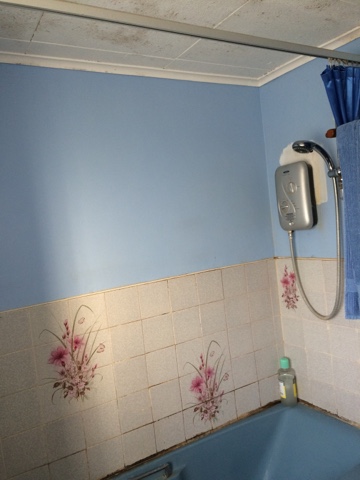 The biggest issues with the old room (discounting the blue suite, and the hole in the floor already mentioned), were the size - the room is pretty much tiny, although still astonishingly bigger than the bathroom in our old place which just ludicrously small - and the lack of storage. There was a vanity unit under the sink but it was essentially one big cupboard, so it made finding anything in there extremely difficult and when you pulled one thing out, there was a tendency for domino-effect to kick in as lots of other things that you didn't want, followed the first. We stuck a set of wooden IKEA drawers on the window sill for odds and ends but that blocked a lot of light and didn't help much on the storage front, either. It also had a tendency to get terribly damp - the 1980's polystyrene ceiling tiles didn't help with that and were truly impossible to keep clean. Everything gradually turned black with mildew and as fast as you cleaned it off, more took hold. The double-glazed window had all its units blown - effectively meaning that it was no longer double-glazed, and the cistern on the loo was getting slower and slower to fill.

We decided from the start that if we were going to do it, we were going to do it right - no cutting corners to save costs, that while it might not be cheap it WOULD end up as we wanted it, and as it would best work for us. We discovered early on that there were ways of making savings too - for example the taps - we looked endlessly for the "right" thing, and finally found a set in one of the DIY warehouses for just under £200 for the pair - basin mixer and bath mixer - but looking online found an identical set from elsewhere for half the cost. The shower - again seen in real-life, but bought online saved us nearly £100. we could easily have spent three times as much on the plain white tiles for the majority of the walls, than we did - but you know, the 55p-a-tile ones looked every bit as nice, and the very first floor tiles that we actually liked enough to put on our floor turned out to cost us a grand total of £25.76 for the entire floor! Those savings in turn meant that when we DID need to spend a bit extra, we did it without flinching. These... 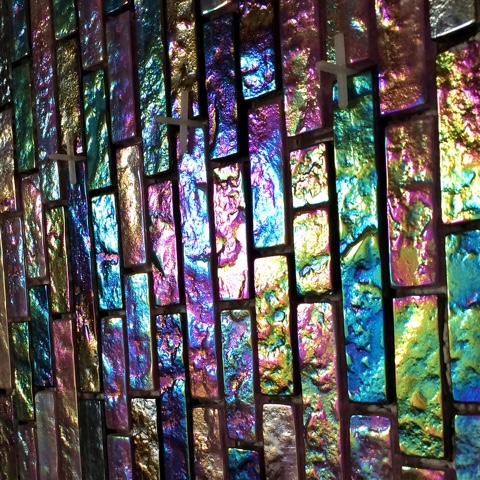 ...for example - our gorgeous mosaic tiles. £135's worth  of gorgeous mosaic tiles, to be exact - BUT they were exactly what we wanted, and they look stunning! (they look even better now they're grouted in, too!) Size limitations meant that we were struggling to fit in anything more than a 2-door vanity originally, but I knew for sure that a while ago I'd seen one that had the layout we wanted AND fitted the gap, so I dug around on the internet until I turned it up. 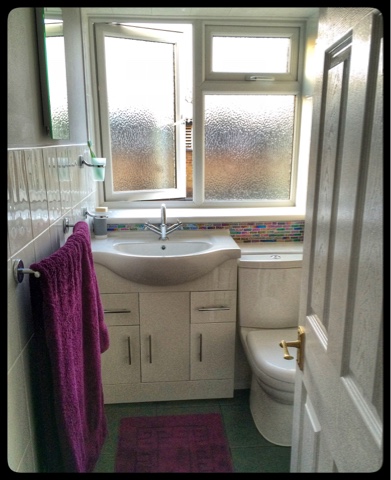 Dave-The-Builder too had some great ideas to offer - it was his suggestion to paint the top half of the biggest wall in a very soft pale grey, for example, and also to continue the splashback of mosaic right across behind the loo, not just behind the sink. He also built the superb recess above the bath, meaning that shampoo bottles etc no longer need to sit on the edge of the bath getting in everyone's way and occasionally falling over and landing painfully on your toes... 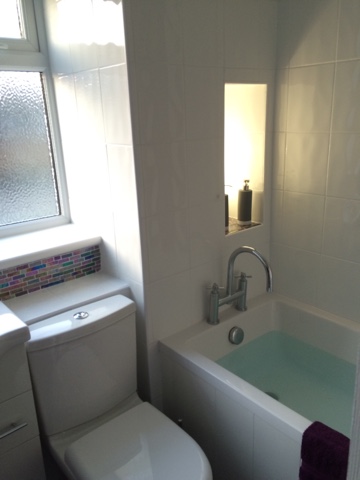 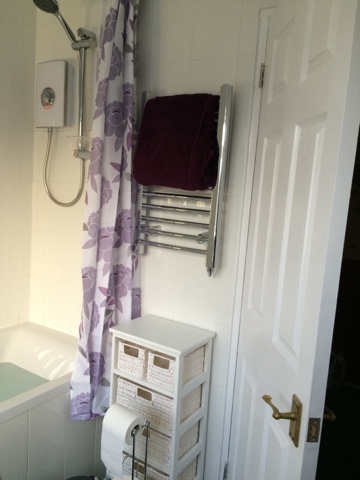 This is the first serious job we've had done on the flat - and we've learned a lot from it - that a really good craftsman is worth his weight in gold, for example, Dave came to us as a recommendation and he's been brilliant. We ended up with the job going ahead quicker than we'd expected though - and that has caused some issues - basically I spent every spare second in the first week running round sourcing things, googling stuff and trying to get everything organised so it would be ready when needed. That when you live in a flat, having a garage which can be used for storage is a godsend - lord knows what we'd have done without that. That Topps Tiles online ordering system with "collection from store" means you have to wait longer for your tiles than had you opted for their free delivery to home. (Yes, that one caused a delay). That actually checking that that the Charcoal Grey rubbish bin you've ordered from the store IS Charcoal Grey, and not realising three hours after you get it home that, in fact, it's purple, saves a lot of time later. (No, it wasn't in a box, I was just so frazzled that I didn't even think about it. Credit to Dunelm Mill for superb customer service to sort that one out though!). Above all we've learned that attention to detail, and trusting your instincts, go a long way - the thing we're most pleased about is that we planned the room out from scratch ourselves, and it's all come together looking exactly as we hoped it would.