I love spending time with MrEH - he's my best friend, as well as anything else, and we are, and have always been, quite happy in each others company for as much time as we have. Equally though we're not joined at the hip - we have different interests as well as those which we enjoy together, during the summer I have my aviation stuff, during the winter he plays rugby. Yes obviously it would be helpful if these two things overlapped on time, but life's not like that, is it! So we're happy to each let the other go off and "do their thing" - sometimes I go to rugby with him, occasionally he comes to an airshow thing with me. He gets on fine with my airshow gang, I get on fine with his rugby crowd. The rugby thing isn't just limited to the season when he's actually playing, either, as there are regular training sessions throughout the year, too, meaning that a couple of nights a week, generally speaking, we need to sort out meals that will work for us individually, rather than eating together.

For me, those evenings are a chance to just cook something really simple but tasty (MrEH usually defaults to an omelette or pasta when he gets home, I never quite know what time he will be in and this is quick and easy for him to rustle up) - often something which he would be less keen on - and then catch up on my "guilty pleasure" TV - Casualty, Escape to the Country, Amazing Spaces... I'm not massively a TV person, but do often have it on in the background while I'm processing photos - so when we're both in generally he will choose what we watch - which suits me fine! 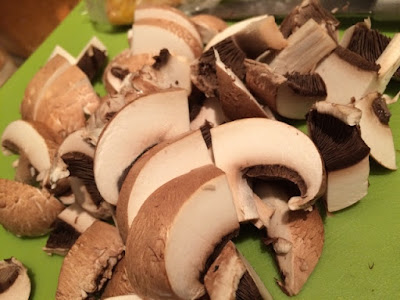 On the food front all sorts of things might tick my boxes, and it will partly depend on what we have to use up. If we have posh bread left over from the weekend then it might be a big pile of fluffy scrambled eggs alongside (never on - soggy food, eurgh!) toast. Or sometimes a tin of soup - ThaT SupermarkeT's own Lentil and Bacon at 45p a can, for example. Yum. (And a guilty pleasure in itself!) Sometimes a bowl of salad with tuna, or small bits of bacon fried to JUST starting to crisp. And sometimes, like Monday night, the "odds and ends to use up" don't lend themselves to any of the above....2 chicken drumsticks rescued from the freezer. A few mushrooms, a handful of rocket, a single egg...and that is when I put into the play the meal that an acquaintance on MSE always referred to as a "Buddha Bowl". Now obviously as soon as you add meat or poultry you're immediately swerving this away from any sort of authenticity, but sometimes that doesn't matter, you know? 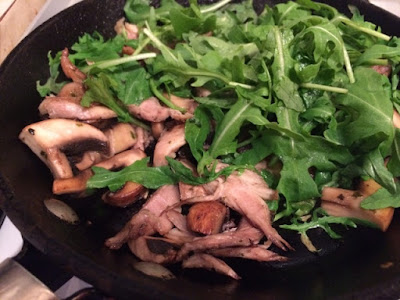 A quick Google search confirms that a traditional "Buddha Bowl" is essentially a dish containing a grain (or at least a starch of some kind), a protein and vegetables, usually with the addition of some kind of savoury sauce. I often end up forgetting the sauce though because the rest all smells so DAMNED good by the time I think about it. Last night was one of those occasions. I chose couscous as my base - easy as you like - a scoop in the base of my bowl, cover with the same quantity of boiling water, whack a plate on the top and leave it to steam which you deal with the rest.  I thickly sliced the mushrooms, I wanted chunks rather than slices, and popped those to cook off gently in a splash of rapeseed oil while I stripped the meat off the drumsticks. Once the mushroom was soft and turning golden I added in the chicken, and stirred it all about until it was thoroughly heated through. A handful of rocket was dumped on top and I turned my attention back to the couscous which was nicely plumped up by this time. A pinch of seaweed infused sea salt and a knob of chipotle butter were stirred through to give it a bit of punch, before the chicken, mushroom & rocket were thrown on the top, juices and all. The finally touch was a just-cooked single egg omelette cut into strips to top it off. Joy in a bowl. even more joyous as the whole lot was cooked in one pan, plus the bowl I ate it from. 4 items were dirtied in the making of this dish - no, hang on, 5, I forgot the fork I ate with! My kind of cooking! 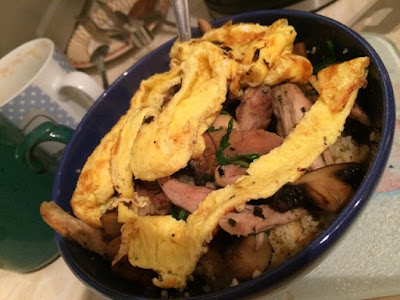 Had I thought about a dressing in good time I might have gone for something like a teaspoon of tahini let down with lemon juice, and then added a sprinkle of sesame seeds for crunch. A vinaigrette with grain mustard added maybe. Or Rapeseed oil, lime juice and finely chopped coriander leaves. (I'm making myself hungry now!) Perhaps next time I should make the sauce first, while the kettle is boiling?!

Do you have a "go to" simple supper dish for nights like that?

You sound as though you've had fun creating a favourite meal. Now the evenings are drawing in I'm spending a bit more time preparing meals - I can't go outside anymore. I usually prepare two meals each evening (or meals that overlap) as I'm vegetarian and OH isn't. It isn't great for the washing up.

Oh sooner you than me Wendy - both on the cooking two meals AND the washing up front! Not getting in until between 7 - 7.30 several nights a week means I have quite a fund of relatively quick to prepare meals, and I'm also a great fan of "cook once, eat twice"!