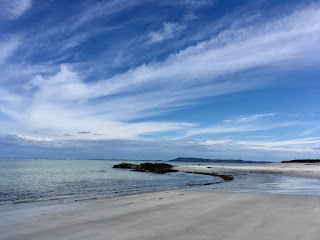 I'm feeling a little in need of a non activity based challenge at the moment - so far this year a lot of the challenges I've set myself have been around exercise, or specifically running, but this time I wanted something different, and it feels like a while since there has been a food/home/money type challenge on here, so that steered things a bit too.  Also I have recently discovered that Sue formerly of Our New Life In The Country is blogging again - and blogging ALL about challenges, in fact, so I'm further inspired by that!

We've had a few fairly big but very necessary expenditures recently - electrical works on the flat, followed by a long outstanding and fairly chunky bill which has been being argued over becoming payable as the dispute was resolved, and then my 12 year old car started showing signs of some nasty corrosion so needed replacement - and while we bought pre-loved, obviously, to get what we needed going forwards with things like Ultra Low Emission Zones creeping across London over the next few years required a spend of just over £8,000 - ouch! Some of that spend was cobbled together from surplus in our car expense account and elsewhere, and a chunk got put onto a 0% credit card to be paid off slowly over the life of the deal, but there was still a big lump taken out of our emergency fund to cover it. Of course this is why we HAVE an emergency fund - but it still leaves us feeling a little vulnerable as the level in there has fallen so much, and is one of the reasons for the challenge being, at least partially, money focused.

My challenge is not going to be "rule driven" but instead goal driven. Some of it is about using what we have, so saving money on not buying things that aren't needed. Some of it is about making better choices and getting back to the basics on stuff that we used to do, and have drifted out of the habit of a little. All of it is about trying to stop and think, and make better, more conscious, choices not only for our pockets, but also for the environment and even for ourselves.  I intend to scrutinise what we spend again, tackle any frittering that has crept in (not much I don't think, but generally when you start looking, you find odds and ends!) and look to target the money we do spend as well as I possibly can. Any surplus in our joint account at the end of each month is going to be directed at the ISA to start the rebuilding process on our poor depleted EF, so anything saved will speed the process up. Again I have no hard and fast figures in mind about where I want to be with this - indeed the challenge itself isn't really one with a fixed end point, either!

We actually made a start on this process before we went away, when I firstly checked our electricity use against our suppliers projection and discovered that the direct debit could be reduced a bit, and second got on the phone to Sky to tell them (again!) that our TV/Phone/Broadband was too expensive (again!). That resulted in a reduction down to pretty much a "bare bones" package at £33 a month, which does everything we need and more, and saves us a good chunk of money each month. The savings from both of those, rather than being transferred to the "money we didn't know we had" account, as we have traditionally done, will instead be left in the joint account to form part of any surplus that is there at the end of the month, and will then be transferred on to the ISA, where our EF lives.

Several of Sue's challenges on her blog have been about using up stores of goods, and as we seem to have been caught in a never ending cycle of that for a rather long while now that was also a natural focus, so we will be turning our attention to the larder, fridge, freezer and cupboards as well. I'm also intending to do some decluttering - items that have been stored "in case" we need them for too long, food items that either need using or binning, clothes that realistically I'm not going to wear again because in many cases they are too big, books, CD's and DVD's that can go to the charity shop to do someone else a turn for some cheap entertainment. In many ways this is going to be fairly similar to some of the challenges I've done before so don't expect anything ground-breaking here - you might get some reminders of stuff that makes you think "oh yes, I used to do that, too!" though!

Another thing I'm not setting any targets for is how often I update this on here, either - all I'm going to say is that I DO intend to update on here,. So while the blogging mojo is strong, there may be a lot of posts, when it wanes again, or life gets busy, less posts. If that happens though feel free to give me a nudge on twitter (@Essexhebridean) and I'll at least reassure you that I'm still alive!