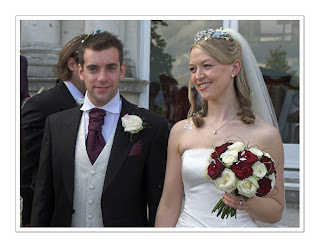 ....Helen, who married my youngest cousin Mark on Saturday. I took my camera along with the idea of being able to capture some candid shots from the day - hopefully giving them a slightly different take on proceedings from that of the official photographer, and in spite of worries in advance about settings, and some very bright sunshine making everything rather contrasty on the day itself, all went very well I think and I have a nice selection of pics. One minor disaster at the start of the day in the shape of me managing to leave my brand new 4 gig memory card bought for the occasion sitting at home (thanks to a last minute panic over not MY outfit, but Ben's!) which meant most of the journey to the church had to be spent frantically deleting shots from the card in the camera! managed to get rid of enough that I wasn't too limited through the day though thankfully.
A bit of history - My Grandparents on my Dad's side had 5 grandchildren - I have two male cousins older (sons of my Dad's older sister) and two male cousins younger (Sons of my Dad's younger sister!). So as well as being the "middle one" - I am also the only girl - something that lead to me being rather spoilt by my Grandad when I was little! The strangest thing though is that we were ALL born in leap years - with the only gap being between myself and Trevor - the second oldest - of 8 years. Strange eh?! It was lovely to see the family on Saturday anyway - we don't get together often enough really these days what with one thing and another, and as the three of us Cousins who are the most likely to get married have now done it, it'll be a while - if ever - until the next occasion like that.
So - welcome to the family Helen - another girl to reduce the "outnumbered" effect a little - especially for my Auntie Sue who, as was pointed out in one of the speeches, can now have more shoes and handbags, and less football, in her life!
Robyn
Posted by Robyn at 6:32 pm