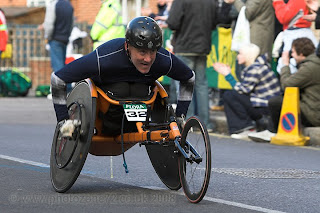 We went up to London on Sunday to watch - and photograph - the marathon. Mindful of the fact that the best pictures tend to be got early on, before the streets get too clogged with the "fun" runners, we arrived at Westferry DLR and walked along the route to our spot of choice, which was delightfully free of crowds and remained so for the entire morning! (no, I'm not saying where, you think we want everyone turning up there next year?!). As always the wheelchair race provided some great shots - as did some of the "Backroom" staff - more of those shots in due course, perhaps.

Kit-wise it was a pretty simple decision to settle on my standard kit. I started off with the 70-200 f2.8 - with which the shot above was taken - before switching to the 24-70 f2.8 when the course got busier and we started walking around. Once the bulk of the runners had passed us, we headed off along to the South bank (via a pub for a pint and a sandwich whilst my rather damp 30D dried out a little and all its buttons started working again!) and the nifty-fifty got an outing shooting the grafitti and the skateboarders down there. I also got some new shots of the London Eye using that lens - the first time I've shot it using that one, and it certainly put a different perspective on the subject and made me work a bit harder for the shots!