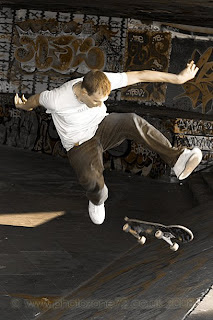 Well, as I mentioned yesterday, we had a walk around the South bank area on Sunday while we were in London. I decided on leaving the pub to head down that way that I was going to put the "Nifty" (50mm f1.8 for the uninitiated) lens on the camera and take the rest of my days shots using only that lens. All in all an interesting experiment. Being restricted to a focal length is strange for someone used to a Zoom. You have to work in a different way - rather than seeing a shot, you have to really look for stuff that will work, and rather a lot of what you frame doesn't, initially, you have to move forwards, or backwards, or change angle...... 50mm did, however, prove to be a lovely length for capturing some urban action from the skateboarders. This shot has been treated to a bit of "funky urban processing" also thanks to an old magazine article I've been carefully hoarding for just this eventuality!
I'm expecting this project to be ongoing, in fact I MAY even try some speedway stuff with it. ("It'll be too short to get anything decent" said Steve on Monday when I debated this possibility with him.....hmmm, best get thinking how I can prove him wrong, then!). Keep your eyes peeled.
Robyn
Posted by Robyn at 11:56 pm