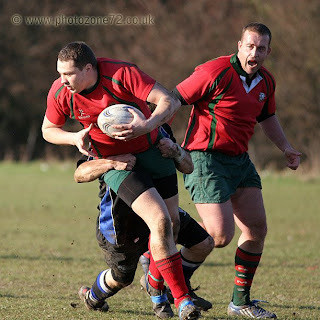 Well - bit of a grudge match yesterday following the last meeting between the 4ths and Chingford - that resulted in a fairly unflattering scoreline for Harlow, although the fact that we only had 13 players goes some way towards explaining that! Anyhow - it made certain that the entire team were incredibly focussed for yesterdays cup match, never a bad thing. Chingford clearly thought their work was done before they even set foot on the pitch - confident would be one way of putting it, arrogant possibly another - oh how wrong they were to be proved, with the 4ths scoring try after try in the first half, and then carrying on in much the same way in the second.  Final score 43-7, taking Harlow on to the semi-finals of the cup competition which sadly happen when we're on holiday. Well done lads!
Robyn
Posted by Robyn at 10:58 am