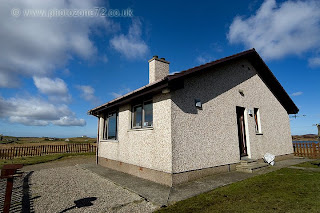 On arriving home from a day out today we found a little padded envelope on the doormat...containing the keys to Tigh Alasdair  which will be home for the two weeks we will be on North Uist.  We actually saw the cottage before we first stayed there - we initially looked into staying there the year Ben's parents came with us, but dismissed it as although it is two bedroomed, the second room is effectively a single, with bunks, and we decided that both us and the inlaws were a little old for fighting over who gets the top bunk! Anyway, knowing we were going to be looking for somewhere to stay the following year we decided to drive out on the Sidinish road and take a look at it one afternoon.....we almost dismissed it at that stage as from the road it does look very small....in fact from up close it still looks very small as the photo above shows! Thankfully inside is a bit of a tardis - plenty of room for us and our stuff. The two windows you see at the front are the Kitchen (to the right) and the lounge (to the left). Both are a good size - the kitchen is probably more than twice the size of ours at home here.  In addition the main bedroom is big, with lots of storage, and there is a small bathroom as well as the second bedroom which would qualify as a "good sized single" I think. We mainly use that for storage - it saves cluttering up the rooms we are actually going to use with rucksacks, hamper etc.