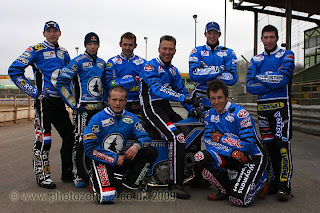 To the start of a new speedway season. We had our press and practise day at Ipswich today - for the first time this was not open to the general public due to Health & Safety restrictions relating to the stadium. As the main photographer for the official website though, thankfully I still got to attend - excellent for me as it means a sneaky-peek at the new riders, racesuits etc as well as the chance to get a bit of practise shooting action stuff before the season kicks off.

Our team has a fairly familiar look to it this year - with Piotr Swiderski, Tobi Kroner and Jarek Hampel all back from last year, plus the return of "old boys" Leigh Lanham, Carl Wilkinson and Danny King, the only true new faces are Pole Dawid Stachyra and Aussie Kozza Smith - both of whom can be seen kneeling at the front of the picture above.  Nice to see the return of a retro-look to the racesuits too, with the red/white/blue flash round the right knee and the stripes round the arms being a nod both to long term promoter John Louis and to the fact that 2009 marks the 40th anniversary of speedway returning to Ipswich. There is a good, positive feel to the team, with everyone speaking of aiming high and finishing higher up the table than last year's fourth place.

Now I've got the smell and sound of this wonderful sport again I'm looking forward to the season - bring it on!