By the time we got home from our Underground Overground walk on Sunday and had a bite to eat, all I wanted to do was to soak in a hot bath for a bit and then head to bed. It had been a distinctly long, if triumphant day, so I took my book, had a nice read until the heat started leaving the water, hopped out, dried off and then fell into bed and pretty much straight to sleep. Fast forward to the following morning and MrEH dashing around looking harassed "There's no hot water!" he exclaimed grumpily. Never something you want to hear before 7am, I instantly found myself thinking of the nuisance involved in needing to get plumbers round and all the hassle that entails, never mind the cost.

Then I remembered. Blast - of course, I'd put the immersion heater on at the same time as running my bath the night before, and since we've had the in-line pump fitted to the feed from the hot water tank to the taps, the water pressure is high enough that the tank gets emptier than it should, which means the element in the tank gets above it's prescribed temperature and the thermal link trips out. I know about thermal links from my time in the construction industry - back then they were often a physical link, which blew, but now the immersion heater ones at least are an electronic style trip that works to cut the power to the element in that circumstance. I've had to reset ours once before, and was aware of the issue with it, but being tired after our long day I simply forgot and just did everything in the wrong order. We agreed that it would have to wait to sort until the evening, got ready with the aid of some boiled kettles for hot water, and headed to work.

Yesterday evening I grabbed my spare and current iPhones - the thermostat on the tank is buried in the airing cupboard and you can't actually see it without a phone camera to look at it with. It's dark in there though, which also means you need a torch, By stacking the phones one on top of the other held in my left hand I can use the torch from one for light and the camera from the other to aid vision, leaving my right hand free to do the re-set. I then turned off the switch to the heater - although it has no power feed during the day I didn't want to take chances. Safety first with electrics, always. If I had been doing this job at a time the power to the circuit was live I would have flicked the main trip switch off while I did the job as well, just to be certain. 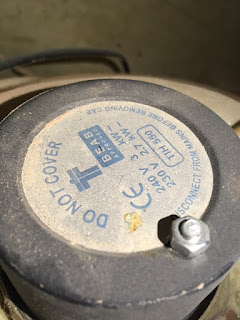 This is the first thing you'll see - with that little nut on the bottom right corner being the key - undo that and set it aside CAREFULLY, and then lift that black plastic cover clear of it's retaining bolt. Bingo - everything becomes clear. 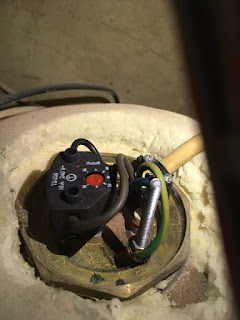 What you're looking at here is the thermostat itself - the larger red disc is used to set the required temperature (there is a slot in the centre of the disk which allows you to turn it to your required level) and diagonally up and to the left of that is the tiny red "reset"button - at first glance I wasn't sure it had tripped and my heart began to sink, but I gave it a little push with a ballpoint pen nib (the perfect size) just to see and heard a very audible small "click" - hurrah! All done - I popped the cover back on, carefully replaced and tightened the nut, then switched the power back on and set the over-ride to the circuit for half an hour to see what would happen. Sure enough when I checked back 30 minutes later - we had hot water again!

This sort of small job is a great example of where the internet can be super-helpful. The first time this happened I admit I really didn't have a clue - I knew what had gone wrong, but not how to fix it, but a quick google search and there was a YouTube video just begging to help. There is something deeply satisfying about being able to carry out this sort of little household fix without needing to call someone in though, even more so when it's ME that's effected the fix, not MrEH! (And who knows, in the future maybe someone will find this post and be able to make use of it in exactly the same way!)

Have you encountered any minor household repairs that gave you a small sense of triumph for being able to complete them?

Email ThisBlogThis!Share to TwitterShare to FacebookShare to Pinterest
Labels: Frugal, Home, Me

Ooh good job! It's always good to have some DIY skills! We have a condensing boiler that I daren't touch, but I at least know how to reset it and adjust the pressure. I rehung a radiator single handedly after it pivoted from it's brackets and flooded the bathroom, my finest achievement to date.

But then I have just realised that I've been using our thermostatic radiator valves wrong for 9 years and wasting money and energy. Whoops.

Oh good skills with the radiator! As for the TRV's - we have them in the office and may well be using them wrong there too - perhaps I should google!