I've always had a fear of setting goals for myself, and no more so than in any environment that could vaguely come under the heading of "sporty" - at school being shorter than average, bookish and with no great turn of speed I got accustomed to being among the last to be chosen for almost anything that involved teams. Indeed the only two sports I excelled at in school were hockey (surprisingly) and long-jump (even more surprisingly) - I represented the school at a minor level in both of those. The mention of netball or rounders sent shivers down my spine though, and cross country running was always one to be dreaded as not only did I tend to get left behind but I got out of breath too - there were no programmes to build up slowly back then - it was keep up or don't - and I didn't.  No great surprise that I stopped doing any kind of organised sport with a huge sigh of relief as soon as I left school and aside from brief periods of going to the gym, it's only in the past couple of years that I've felt any real inclination to have another go at being a "sporty person".

Accustomed as I was - in my head at least - to failing at anything "active" it came as no surprise when I first attempted the Couch to 5k programme and couldn't do it. It just felt as though it underlined my long-standing aversion to setting proper, solid goals - I wouldn't achieve so there was no point in trying, I'd just make a fool of myself. This time round though something was different - and the nagging voice in my head kept on at me to have another go. Each time when I started I took a deep breath and thought that maybe, just maybe if I could get through the programme I could do a parkrun "or something" - and then each time I failed I kicked myself AGAIN for being gullible - for being brave enough to stick my neck out. Of course I now know why I was struggling so much in the first place! In February I did my first 5k "race" and last week I did another - knocking a massive amount off my previous 29:36 time on the same course, coming in this time at 27:47! (Yes, remember those sub-30 people I "wasn't fast enough" to line up with? Now I'm one of them! I've also been doing regular Metafit classes - after years of running a mile at the idea of doing any form of group fitness this was another huge barrier broken down.

I recently photographed a friend's baby's christening - which also took a degree of "being brave" -  I'd be the first to say I'm no event or portrait photographer - it's a long old way outside my comfort zone and I hesitated like mad when my friend asked me. Not because I didn't want to do it, but because I was frightened of messing up, frightened of letting him down and frightened to take the risk. As I said to him while I was hesitating "I'm trying to work out if I'm brave enough" - back came the reply with absolute confidence "of course you are!" - and yes, I was, mostly because of the pure sense of belief HE had in me. I probably only have two friends who I would even contemplate taking on something so important for - and I've now shot the wedding for one of them and this christening for the other - and in both cases it was their absolute faith in me that gave me enough confidence to take a deep breath and say "OK then!" Two people, both of who's judgement I trust - if they reckon I can do something, they must be right, yes? Another huge first at the christening was that I said to MrEH (Who was using the second camera to pick up on extra shots I might not see or be able to get) that I didn't mind if he got me in any photos - now bearing in mind my aversion for having my photo taken this was also a massive thing. In the past with anything like this he's had to be careful to shoot around me and I've been constantly conscious of the other camera. This was definitely "being brave..." 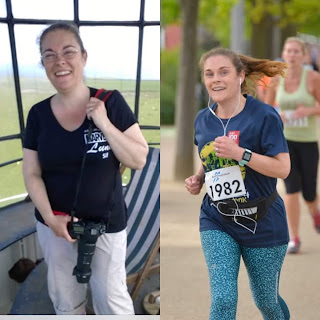 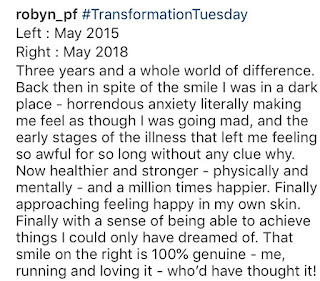 ...for a long while I've been admiring other people's Transformation posts - being super inspired by how well they've done and what they've achieved, but it was only as a result of a comment from someone else that I finally felt brave enough to post my own - and only then as a result of the prompting from the photo on the right - taken by one of the official photographers at the 5k last week. Taking the step of posting the two pictures also made me brave enough to go into a little more detail about my state back in 2015, when the left hand photo was taken. Having been hit out of nowhere with crippling anxiety and struggling significantly with depression as well - and no real idea how to handle either - the holiday that this photo was taken on, along with our trip the Hebrides a few weeks before between them I am certain saved me from sliding fully into a deep black hole. Spending time both alone and with MrEH in the Hebrides, and with him and other friends on this trip to Lundy forced me out of the repetitive cycle I'd found myself in and on return home I managed to pin down both the cause and a way of working through things, and claw my way out. I'm not "cured" - it's not that easy, but I have coping strategies, and the knowledge to see when things are becoming problematic and deal with them early on. The most valuable thing I read when I got the diagnosis was "You're not going mad - even if you think you are" - I cried with relief at that one. Add to that having been able to take up regular exercise which has itself been superb for my mental health, it's also had effects physically as well of course - I'm finally back to a size that is entirely more natural for me and, as I said in the text above, that means getting back to feeling more comfortable with myself all round.  Previously "wanting to lose weight" was back there with the "setting goals" thing - set an over-ambitious goal > fail to meet it > give up > not bother trying again as "I'd only fail". This time round there were no goals beyond "do a bit more than I did yesterday/last week/last month" and that worked for me. I'm a long way from being "confident" still - but I'm on my way there, hopefully.

There's more bravery to come I'm sure - but now I really AM brave enough to face the idea and set goals - yes, proper ones - to achieve the things I want to, and indeed to admit that there are things I want to achieve too. Covering both the "not being sporty" and the "group exercise" thing I'm joining in with a running group for a run after work tomorrow (weather permitting, but the forecast looks good!) and actually looking forward to covering 6.5 - 7k with other people - none of whom I have even met before! MrEH and I are starting to make steps towards our long-term dreams, and I'm starting to think about stepping up my running distance towards doing a 10k later in the year too. It's actually starting to feel like those targets for the year that I set myself are taking off - I'm pushing myself outside my comfort zone and I'm definitely doing it with a smile on my face!

I almost completed a C25K a couple of years back but really got bored in the last few weeks, its a great achievement to finish it and to go and race too. You should be very proud of yourself.

I'm glad that you are conquering your anxiety too - heres to a bright new future!

Thanks Aurora - yes, the boredomm thing is the reason why I can't ever see myself doing a longer distance than about 10k - I mean, I love running, but I can think of other things to do with my time as well!