A couple of years ago we were introduced to the "Hidden London" tours - organised by the London Transport Museum, these take small groups of people to the parts of the London Underground system that your regular commuter doesn't get to see. The first one we did was to the old Down Street station -  this station sat between Hyde Park Corner and Green Park on the Piccadilly line but due to the proximity of the other two stations it simply didn't get the footfall and so was closed in 1932. That was far from the end of its life though as it was later to see service during world War 2 as the Headquarters of the Railway Executive committee and even provided refuge for Winston Churchill!

In February we did our second Hidden London tour - this time the disused tunnels at Euston. Our little group met in the old Leslie Green designed station on Melton Street - no longer in use apart from providing ventilation to the active tunnels below: 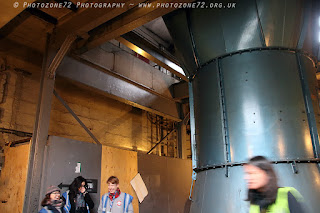 From there we had a short walk across to the Mainline station and down the "shortcut steps" known to most Londoners to the tube station where we were ushered through the barrier (no Oyster cards required!) and on to one of the Northern Line platforms where a door at the end lead to the tunnels we were after. 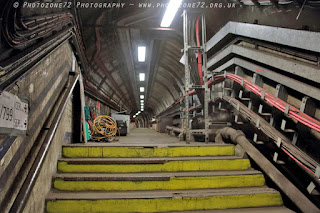 Unused by the public for over 50 years, these tunnels were closed when construction for the Victoria Line started - since then they have been used to run additional ventilation pipes, and for storage and access for those working on the station, and as a result the tunnels are astonishingly well preserved exactly as they were when the last commuters passed through. 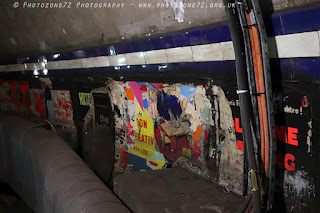 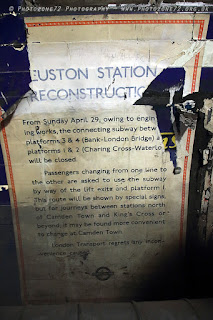 As well as the history of the tunnels themselves we learned about the way the tube stations were constructed in those days - basically they were  built in "kit form" from a standard pack of parts - which leads to oddities like this ticket window - designed to allow commuters to purchase tickets to change lines without having to return to the main booking hall... 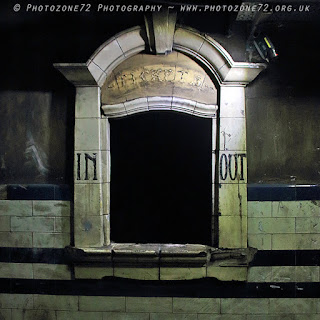 ...as it is a single window the "in" and "out" make little sense and it can only been assumed that they were in the parts supplied and therefore got used regardless! 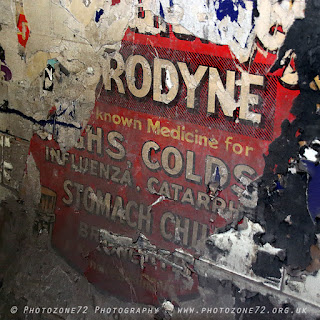 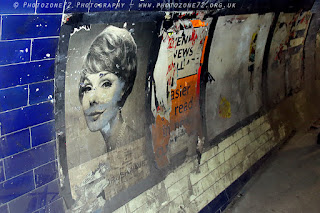 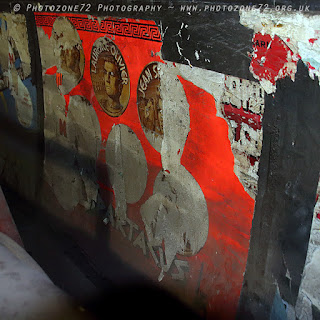 Originally there were lifts running from these platforms to surface level at the Mainline Station - here is the view up one of the shafts... 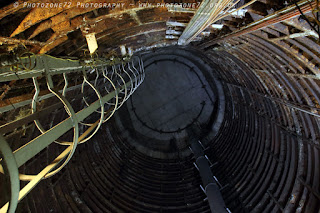 These tours are absolutely fascinating - not cheap, we paid £85 each for the Down Street tour and £45 each for this one I believe - but good value for money, nonetheless, and the money supports the London Transport Museum helping to ensure that these sorts of tours continue to be available. since starting to write this post (yes, writing,m and actually getting around to posting can be spread over a l-o-n-g time period!) we've actually done yet another - so I'll try to tell you about that one before all that long too! There is a feeling of visiting somewhere that has been frozen in time when you explore somewhere like this - and some of the small details are absolutely fascinating - for example did you know that all the rings that line the tube tunnels are date stamped with at least their year of manufacture, and sometimes with the day and month also (If you happen to be exiting a Jubilee Line Extension station any time soon take a look at some of the rings that are visible from the escalators for examples of that. 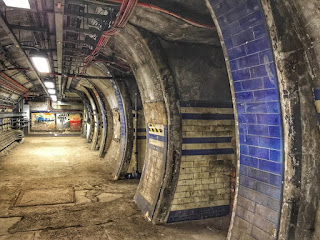 I'll leave you with a picture that pretty much sums up the Euston tour, for me - this is the tunnels as they were abandoned when this section of the station was closed off. The colours on the tiling still so vibrant, and those amazingly preserved posters - there is almost a feeling that it could have a bit of a clean up and swing back into action!