A couple of years ago, for my birthday, MrEH bought me a flight in the same type of vintage aircraft I have flown in before - the DeHavilland Dragon Rapide. I looked into booking it that first summer - only to find there were no available dates that suited me. Then I looked into booking it again last year, only to find that the company running the flights did not, at that stage, have a secure website for taking card payments for bookings....sigh! I suddenly thought about it again a few weeks ago and decided to take another look, and to my delight firstly the website is now secured and secondly there were LOTS of dates to choose from - including to my delight one in just a couple of weeks time, on a Friday where I had nothing in the diary!

Last Friday I travelled to Duxford where I was admitted to the Imperial War Museum free of charge on production of the voucher I received when I made my booking, given a map of the site and dispatched off towards the "Classic Wings" enclosure on the flightline in order to register my arrival, get given my ticket for the flight and hop on the scales - everyone gets weighed so that Classic Wings know how to distribute people through the aircraft - apparently she prefers lighter people at the front, which was wonderful for me as that meant I got given one of the front seats, and being directed to board first meant that I got the one directly behind the pilot's doorway - meaning I could see directly ahead of me throughout as well as off to the side - wonderful! 7 of the 8 seats were occupied in the end - including the one behind me which was taken by the loadmaster from one of the American Douglas Dakota's that had arrived at Duxford ahead of the D Day commemorations which were shortly to be taking place - they weren't going to have time to do any sightseeing so when he'd seen the flight advertised on arrival he thought it would be a great way of seeing London!

Our pilot - Brian - had a quick word with us before popping on his headset and getting ready for engine start - basically explaining that the exact route we took on the way down would depend on how we got routed by ATC for the three busy airspaces we'd be travelling through - Stansted, London City and Heathrow Airports - but that essentially we'd be going roughly through the Lea Valley before reaching central London, over the Olympic Park and then on to the river, before doing some manoeuvering over some of the main sights to make sure everyone stood a good chance of seeing them. Then it was engine start, taxi to the runway and before we knew it we were airborne and turning gently to the south to start our trip. I was looking out for Harlow on the way down needless to say, but the best I spotted was Hoddesdon, not all that far from us, and at that point I switched my attention to the front to see the Lea Valley appearing ahead of me, and Wembley visible way off to the West shortly followed by the new Tottenham Hotspur stadium.  It seemed hardly any time after that before the "Stadium hat-trick" was completed by the Olympic Park appearing, again off the starboard wing - amazing to see the whole park laid out below us like this! 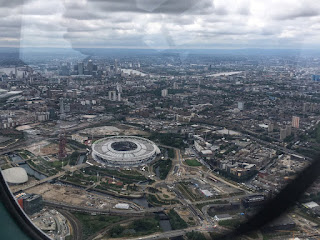 On to the river, then, and a sweep over Greenwich and past the Isle of Dogs and the Millenium Dome - or the O2 as we're now meant to call it of course!  Amazing to see the iconic shape of the "bulge" in the Thames formed by the IoD & the Greenwich Peninsular clearly visible 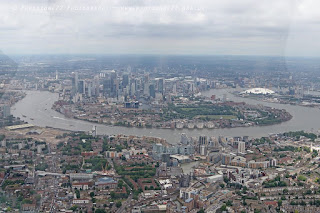 Look carefully in the one below and you can see the Cutty Sark (click on the picture and it will enlarge) as well as the Royal Naval College at Greenwich - this was a favourite section when we did the Themes path walk through this area. 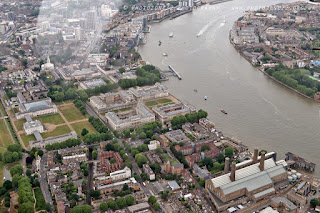 Brian wasn't kidding when he said he'd make sure everyone got a good view either - we flew around the Shard several times from all angles getting great views - at times it felt as though we were almost on a level with it! 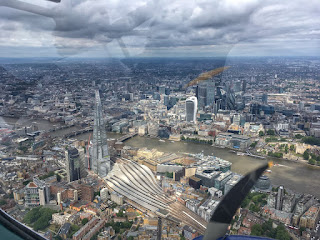 These are a mix of pictures from my phone and some taken with the camera that yes, I inevitably had with me too! There are a LOT more photos to go through yet too and I may well do another post at some stage with some more - I've had a quick look at a few and it's fascinating spotting places that I'd not recognised from the air. Apparently we had a quite wide divert around Stansted airspace both ways which meant we got a slightly longer flight than sometimes happens - I think the only person even slightly complaining was the lady in the other front seat who did need to make use of a little white bag at one stage, poor thing! You get a lot of turbulence from an aircraft that size, and combined with the "vintage" smell of fuel that tends to linger, it can make you feel ever so slightly queasy - I found that making sure I fixed my eyes out at a distance if I started feeling even vaguely uneasy did the trick for me, thankfully.

It was a fantastic experience and one I'd certainly be interested to repeat at some stage - Classic Wings are efficient and friendly and if anyone fancies a similar experience I'd strongly recommend them - there are also other companies doing the same thing on the same aircraft type elsewhere in the country, I believe. For a Londoner, the trip I did would really be hard to beat, however!