Healthy is not a number.

If you use Social Media at all then it's likely you will be aware of the storm that has blown up around the Daily Telegraph article about Nike's use of a plus size mannequin in their London store. Nike say that their intention is to celebrate the diversity & inclusivity of sport - acknowledging that people of all body sizes exercise and need appropriate clothing for that.

In case you've not seen the article, then below is the first section... 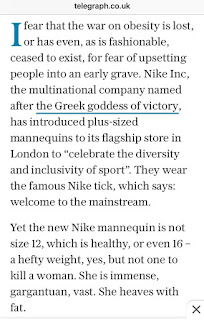 This article is, perhaps surprisingly, written by a woman - one Tanya Gold, according to the byline. Now read that second paragraph again, and ask yourself exactly what level of hatred is needed to make someone use language like that. I'm actually unsure what label is best applied to it - misogynistic? Almost certainly. Judgemental? Hell, yes. Spiteful, vindictive, hateful? All of the above. She humanizes the mannequin from the start, and then proceeds to talk about "her" in such vicious terms that it is almost breathtaking - what sort of person would even contemplate describing another woman (or indeed an entire group of women!) in those terms? For the avoidance of doubt, if you've not seen the picture of the mannequin in question and are now imagining some kind of grotesque caricature of a plus-size lady in plastic form, this is the (copyright Nike I believe) publicity shot that was put out: 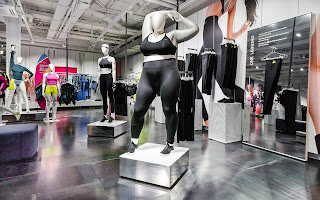 Now go back and read the final sentence above again. "Heaves with fat"? Seriously? Gold is not done here though - having thoroughly offended any women of size 12 and above with her first comments, she continues... 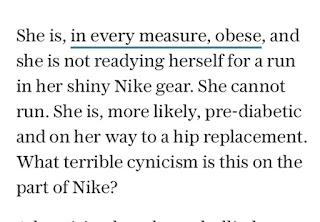 Perhaps the first question here is what the "measure" that Gold might be using with her sweeping statement might be. BMI perhaps? That "measure" that has been proved already to be a terrible indicator for health, and that has been ditched by pretty much all forward thinking medics? (It makes most of the England Rugby team obese, for a start, because it makes no allowance for muscle -v- fat - so somebody with a lot of muscle mass and a very low body-fat percentage will still show as "too heavy" according to its very rigid structure.) "She cannot run" well, no Tanya, she's a plastic model, but a woman of that size and shape might very well be able to run....after you with a big stick, quite possibly, following those comments. A hoard of women of ALL shapes and sizes have fired up Twitter with an attack on this statement - triathletes, long distance swimmers, marathon runners and indeed ultra marathon runners too, all saying "Oh yes we bloody well can!" in incensed tones.

Prior to this Gold was most noted for an article whining about people judging her for being a heavy smoker, it seems, however a little dig back through her archives lead me to an interesting Daily Mail (sorry - I'd never normally do this and I'm certainly not linking to it!) item from 2008 in which she says, among other things "Yes, ladies and gentleman, I am fat. You want to know how fat? OK, I am a size 16 and I weigh 14 stone."  and "Here's a thought: what if the only barrier between me and my future happiness is not my tsunami of flesh but your giant prejudice? " Interesting use of the phrase "tsunami of flesh" there - not dissimilar to "heaves with fat" in some ways, it strikes me. She goes on perhaps to shed a little light on where things may have gone wrong "I have been overweight since about the age of ten, so I was bullied at school, naturally. 'You're fat!' the other (mostly female) children would say, 'and we won't play with you.' " Ahhh....OK, now bullying, as is well documented now, can leave mental scars far beyond the school playground, and it is also reckoned that some who were themselves bullied go on to bully others, so are we perhaps a little nearer to getting to the bottom of Miss Gold's vindictive comments in her more recent Telegraph article?

As someone else said on Twitter, only the lady herself can truly know why she is so angry about this issue, and perhaps even she might not be able to put a finger on what has happened over the past 11 years to take her from hotly defending people who look not unlike that mannequin, to instead trying to undermine and destroy them in truly cruel terms, but is there just a chance that perhaps the person she is really lambasting here is herself? Could it perhaps be that it is she who is unable to run, and possibly struggling with health problems that may (whether truthfully or otherwise) have been linked by others to her perceived "unhealthy" appearance, and that a result she feels so utterly removed from ever being able to wear clothes like those produced by Nike, and modelled by their gloriously confident looking store display, that she has allowed her own resentment to flow out onto the page? Back in 2008 her entire Daily Mail article is littered with clues that even then, she didn't like herself very much - self-deprecating humour presides throughout and you firmly get the impression that she was taking swipes at herself before anyone else could - 11 years on though and she's turned that on others, and particularly those who she fears may be happier with their lot than she is, maybe? If so then she needs to address her own issues, and not take them out on those she resents for their abilities and contentment with their lot.

Ladies - no matter what shape and size you are, remember - Healthy is NOT the number on the label of your knickers. Fit is not whether you fit a societal visual "ideal". It is not for anyone - male or female, larger or smaller, to judge and criticise you, or to make a call that you are "unhealthy" because of the size of clothes you wear. Nobody can tell your state of health simply from looking at you. The Telegraph should be ashamed of itself for giving an article that potentially damaging page-room - and especially so soon after a Mental Health Awareness week which this year focused on Body Image. No subsequent apology can right the wrong that they have done to 50% of the UK population.