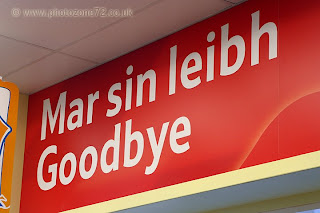 And a rather appropriate subject for the final post from this trip to the Western Isles really.
Tesco arrived on Lewis last year after taking over a store which was previously operated as Safeway, later becoming Somerfield. There was a mixture of anticipation and unease over the move - many felt that it was only a matter of time before the supermarket giant decided to try Sunday opening - something which would by no means be accepted by the majority of the strongly religious population on the Island. This, remember, is a place where, when planes first started running to and from the Island on a Sunday, the protests were vehement enough to gain national news coverage. Well although we can only look at it from a visitor's point of view, I would have to say that so far so good as far as Tesco are concerned. They have maintained the lines of local produce, and as you can see above the major signage is in both Gaelic and English. Prices appear to be fairly level with the mainland which is also excellent news for the Islanders. Sensibly they have not made so much as a murmur about Sunday opening, although this summer will be their first full tourist season so things could yet change on that front.
Next time I update will be from home. We've had another fantastic trip here in spite of mixed weather last week, the final few days have been glorious though and another good day is forecast for tomorrow, which will at least make out 7.30am ferry crossing somewhat more bearable!
Robyn
Posted by Robyn at 10:00 pm

Tescos
gives
convienie
nce - but
what
should
really b
happening
is
farmers
markets
and local
supply not
jurt on
the Outer
Hebridies
but
everywher
e. I've
another
riding
lesson
this
afternoon
- I'm
learning
ready 4
the
Himalayas
this
summer.
Think I'll
go and
check out
the
excellent
cafe at
Cladach.
There is a
great pub
there
also - the
Westside
Inn.
Another
one of
those
atmosphe
ric old
Outer
Hebridies
buildings.
It really is
another
world
here - like
its not
even
Scotland
let alone
the UK.
Magic!

Tescos PLC is no fool. Like in North
Wales they'll do the bilingual act 2
keep the languge activists happy, but
they want u'r soul! They want
market control. I wood avoid them as
much as possible and use local
supply.

I agree with the comments about Farmers markets completely - if only more people could be persuaded into the merits of buying food as locally as possible, whilst insisting on excellent quality, eventually this way of living/eating would be a habit for everyone and as a result prices would actually fall. Whilst the Likes of Tesco, Sainsbury et al have such a huge market share though this is not going to happen.

I also agree wholeheartedly about the Westford Inn - wonderful pub, and somewhere we spend plenty of time when we're up. Actually, Alistair & Elisabeth who are mentioned in an earlier post on this blog, are the owners!