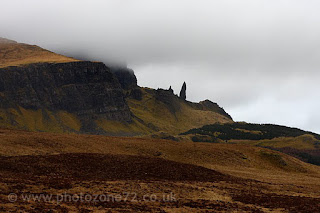 As I write we are cosily settled into Tigh Alasdair - the fire is lit and we have beer...what more could we want? The wind is blowing, but it's hitting the back wall of the cottage at the moment - the one with no windows or doors, so we can barely hear it, just feel its vibrations from time to time.
Thanks to the ferry timetables having just switched to the summer schedules, we had this morning free to look around Skye....once we had found somewhere to put a new headlamp bulb in my poor long-suffering Clio - thanks to a lapse in concentration on the part of the driver of a 40' artic at Hamilton Services yesterday, she found herself getting her third impact from a truck in her short life.....thankfully this was rather less destructive than the first two - as this one reversed into us square on - his under-run bar into our bumper - both components did their job perfectly and the only damage proved to be a blown headlamp bulb on the Clio (presumably suffering from shock?!) and a lorry driver with sore ears after I had bawled him out for carelessness! A bit of me is slightly relieved if I'm honest - they do say these things come in threes after all and if so, that is hopefully my ration!
Back to Skye then - those of you who know your British geography will recognise the famous Storr rock formations in the shot above. There are lots of these strange rock pinnacles around the main one, but the "Old Man" is the one that everyone is familar with. It's certainly a very peculiar landscape, but that's something that Skye seems to specialise in.
Robyn
Posted by Robyn at 10:18 pm