Here you go then, time to share another couple of the pics I've entered for the photo competition over on the www.southuist.com website. I'm extremely flattered that my pics seem to be getting quite a bit of attention - far more than I expected! 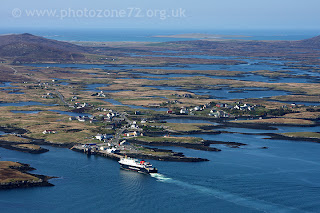 This is probably my personal favourite of the pictures I've entered. For a start I had to really work for the shot - this was taken from the top of North Lee - 263m of uneven ground with a long walk-in. Of course the long lead in means you know you've had a walk by the time you even get the base of the hill.... As you can see from this though it was well worth the scramble! I realised part way up that the ferry was due a short time later, and was utterly determined to make it in time to see her come in.
The link for this pic is here: http://www.southuist.com/photos.php?action=viewimage&pic_id=732 - If you'd like to give it a vote in the competition for me you need to go to the buttons below the pic on that link, and either "share", "Like" or "Tweet" to give it a vote. 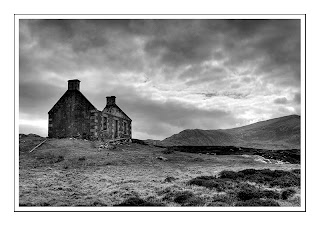 This was taken on a lovely walk at Lochcarnan, South Uist. Initially the light seemed distinctly unpromising, but as we approached this abandoned cottage all of a sudden the clouds shifted and presented a scene just begging for a bit of mono-moodiness. This is one of those places where there are ruins next to ruins too - just to the left of where I was standing was the ruins of what was presumably the family's blackhouse, which they had obviously left to move into the one pictured.... although the entire settlement has now been abandoned.
The link for this one is http://www.southuist.com/photos.php?action=viewimage&pic_id=726 and the same thing applies, to vote, click on the link, then on "Like" "Tweet" or "Share" below the image.

ps - there appears to be some issues with links on Blogger at the moment so the links here appear in full in case they are not clickable.
Posted by Robyn at 9:09 am