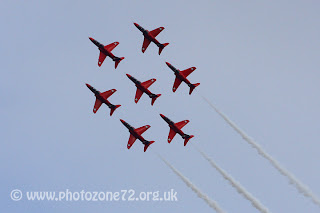 The end of August sees the annual Port Of Dartmouth Royal Regatta, in Dartmouth, Devon.  MrEH hails from those parts, and as we have family down there we usually find ourself there for "Regatta weekend" and all the fun and games it entails. This year was no exception, with lots going on - everything from the "Sea Fury" plane of the Royal Navy Historic Flight, to the newly introduced "Bungee Rowing" event (yes, it is exactly what it sounds like!). To many though, young and old, the excitement peaks on the friday afternoon at 6pm when the Red Arrows fly in.  The Reds have been heard to say that Dartmouth is one of their favourite places to display, and indeed invariably we get a super display, including one year when one of the planes suffered a mechanical failure on the fly-in from Exeter them taking the unprecedented step to delay the start of the display while the spare Hawk was collected!  The display takes place in the river-valley, which forms a natural amphitheatre and makes the whole thing feel so much more immediate. It also has the advantage that, by climbing up the hill above the town, you can get a near-unique view looking down on the planes. You will of course have guessed by now that this is precisely what I did!

45 minutes before display time I started up, stopping a few times after the steepest bits - we're talking some of the steepest roads you can imagine here - 33% gradients - fancy driving your car up there? No, me neither, but people do! Eventually I reached the end of the lane onto the middle of the hill itself, and just needed to choose my spot. This year I elected to climb almost to the top, most folk who've walked up stay roughly around where the path comes out, while those who have driven and parked their cars in the car park on the far side usually sit on the top.  I chose a spot with some nice dry-looking grass and nobody else around (to complain when I wanted to stand up through the display, not because I was being antisocial!) and settled to wait. 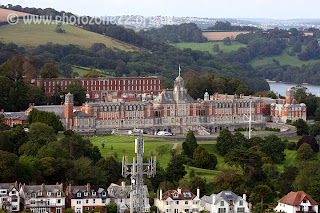 The views are phenomenal - you can see right down on the town, across to Kingswear at the other side of the river, out to Start Bay and the sea, and across to the Britannia Royal Naval College - although only the bits of that which they are happy for you to see, naturally! I'd have been quite happy for a good while sitting just looking at the views to be honest, but before too long the Battle Of Britain Memorial Flight appeared - a Spitfire, a Hurricane, and a Lancaster bomber. I have a bit of "history" with the BBMF - rarely managing to see all three planes together, so I was most relieved to see that this time, at least, all were present and correct! The Lancaster pilot seemed to think it was quite entertaining to do low passes over the hill we were sat on, too - believe me, they are pretty noisy at point-blank range! 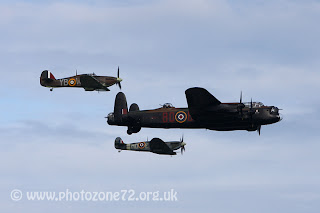 Then it was on to the main event - and we all waited with baited breath to see the "Reds" appear. It was easy to spot those who are "regulars" up the hill for this display as we were the ones watching out to the right - their usual pattern is to appear over the brow of the hill on that side as they can "creep up" on the town itself that way. Not this time though - instead they appeared from the top of the hill behind us, making us all jump! The display itself was phenomenal as ever - from my vantage point the close-passes from the synchro-pair look even closer and we can really appreciate the precision of the whole thing. Ironically after the difficulties of getting the timing right for the synchro-pass shots the week before at Clacton, this time almost all of them came off perfectly! 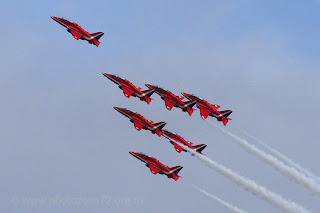 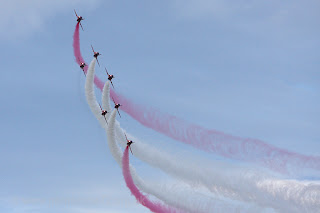 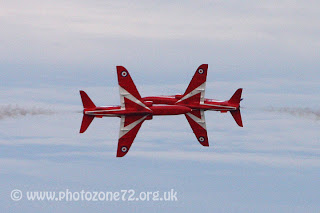 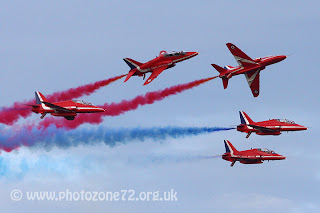 (This post was written way back in early September, but posting was delayed due to the failure of the old PC.....and then I forgot about it - sorry!)
Posted by Robyn at 1:52 pm