...that's the UK airshow season at a close for us. I spent yesterday at RAF Scampton for the Reds final ISP's (In season Practises) of the year - then on Thursday the jets and Circus depart for India on the first leg of their tour. The other Blues going as part of the support crew will also be heading off but their departures are staggered over several days throughout the week between now and Saturday. The next time I will see the jets fly now will probably be in the New Year, which in itself feels odd as normally this time in the year we're looking forward to winter training and all the fun and games that go along with that.

It's been another brilliant year - no question about it. From the season opener for the team at Shuttleworth in May right through to yesterday we've had so much fun again. Once again we have people leaving - my friend Nicky has already departed the Squadron having been promoted and posted into a new role. Three of the pilots will be leaving the team when they return from tour - Synchro leader Steve, and Reds 8 & 9 - Stew and Joe. They'll be missed as always when they move on. On the bright side we have a new bunch who will be moving into the coveted "Circus" roles backseating in the jets during next season - including a very good friend's husband so SHE'S over the moon at all the photos she will get of him doing his thing during 2017!

Possibly the best way possible of finishing the season, for us, was this... 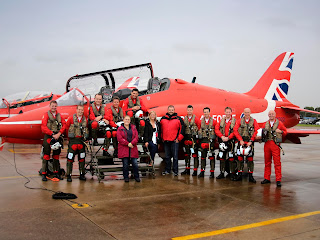 ...we've waited a while for that. Extra special for having Lingy (Red 10) in there too - and for me also because it's the three of us - me, Claire & Tom - who've done so much and shared so many of the amazing experiences over the past few seasons. It just wouldn't have been quite the same if one of us had missed out. Bloody epic. Smiling may happen for a while yet... ;-)