Playing by the rules...

...some people are just really good at "doing things properly" - you know what I mean? They are the ones whose clothes are always ironed, who have proper organised "date nights" with their partners, whose homes are tidy, meal plans magneted onto their very tidy (and clean!) fridge doors and the lid to the recycling bin actually closes... Then there's the rest of us. Now I don't know about you, but I've never been good at sticking to the rules. As a child, colouring in, my attention invariably wandered and I went outside the lines...in fact, that sums up my life really - pretty bright, and colourful, and fun, but a lot of that bright, colourful fun just manages to sneak outside the lines and look a bit untidy. *Sigh*. I've spent years feeling I should be "that person" - the one who tidies their winter clothes away neatly in April and brings them out again in October. The person who knows precisely where to find things, and never forgets a birthday (sorry to all those who either haven't had cards from me this year, or got them very, VERY late. Again) Some of those things I'd even like to achieve - a tidy house would be my dream, but unfortunately I live with MrEH and this comes lower on his priority list than it does on mine. Plus I'm actually a bit rubbish about keeping up the sort of routines that enable true tidiness, "stuff" just seems to creep in. I'm reminded here of a conversation with a good friend of mine, in connection with a planned move of accommodation that he was preparing for - he was complaining about the amount of stuff he seemed to have accumulated, to which I replied "I had you down as a bit of a neat-freak?" "Yeah I am!" he responded "...but I'm a hoarder, too!" Once I stopped laughing I realised that yes, I can identify with that!

Regardless of how organised I can be through the quieter, winter months, things tend to get away from me again during the summer. When I'm away most weekends doing brilliantly fun airshow stuff, and then spending most of my weekday evenings sorting out the photos from those weekends, boring stuff like putting clothes away and (ugh) dusting tend to get pushed into the background. I start the year writing everything into a diary...dates, birthdays, anniversaries, you name it, it will go in there. By mid July though? Less so, and by August I'm a stressy heap of disorganised forgetfulness all over again. and that just isn't good. Oh and I beat myself up for not managing to keep on top of everything, which just adds to the stressiness...yes, life in my head is a complete ball sometimes!

Is there another way (she wondered, out loud)? well yes, I think there is (obviously - is there wasn't, this would be the shortest blog post ever wouldn't it!) - it's just about finding the ways that things can work for me. I suspect the first thing is to keep things brief, not overload myself (the "you can do 15 minutes of anything" approach) and to take things a day at a time. I wrote elsewhere recently "And everything else can wait" - and do you know, it really can! SO:

Lists: I know they work for me, but letting them get overly long is counter productive.
15 minute bursts: 15 minutes of tidying somewhere at home EVERY day I'm there.
Goals: Short lists of 5 items - nothing earth shattering but just things I want to get sorted. New items to go here mean a new list, and that list will never be more than 5 items long.
Wants: Things I'd LIKE to do, stuff for me. If it never happens, it doesn't matter.
Preparation: whether it's getting stuff ready for the morning (clothes etc) or batch cooking ahead of time.
Prioritisation: Key to organisation and getting things done, I guess?

My "Bullet-esque Journal" is going to help me here. (Yes I KNOW it's a fad, and I KNOW 90% of people will stop using them once it stops being trendy, I'm hoping that as it's a variation on the diary/notebook thing I've done for ages anyway, I'll be in that other 10%, OK? Humour me here!) I'm a visual person, and having stuff written out in a very easy to follow, visual way works far better for me than disjointed dates on a page with no room to elaborate on anything much. Plus I actually like writing, as opposed to typing - notebooks are a regular feature of my life. Of course I'm not following the rules - but as someone else pointed out we're pretty sure there aren't "Bullet Journal police" out there ready to pounce at every incorrect indicator or missing page number. Mine's sectioned (Yes, as I should probably be, before anyone else jumps in there!), a sort of diary bit, a "planning" section, somewhere for finances as that is a regular thing I use a notebook for, and a bit for general notes and to-do stuff. 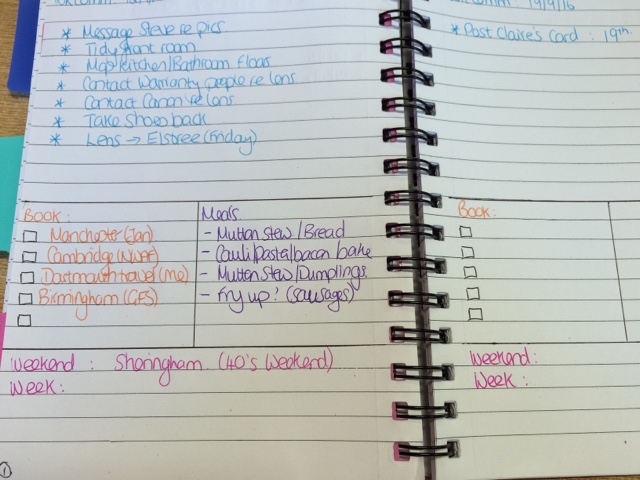 Weekly pages are just that - a page, with room for planned "stuff", a meal plan, stuff that needs to be booked and a SHORT to do list. It can't get longer than that as that's the space available for it - simple, yes? I'm also allocating a page per month to keep track of the bigger picture, and a "forward planning" grid of 12 blocks which will help to keep track of things planned for next year, thus removing some of the panic associated with potential double-bookings.

I need to remember that I don't have to do it all, that sometimes the path of least resistance is the easiest path to take. Sometimes, "enough" is absolutely fine. My home doesn't have to be worthy of a "Homes and Gardens" spread, it just has to be somewhere I want to go home to on a cold night. I need to remember to set aside time to organise myself, not just to try to hit everything head on. I've got 8 months until the airshow season gets up to speed again - is that enough time to develop habits that I may be able to continue even when I'm busy, I wonder?
Posted by Robyn at 3:20 pm

Email ThisBlogThis!Share to TwitterShare to FacebookShare to Pinterest
Labels: Consciousness, Family, Home, Me