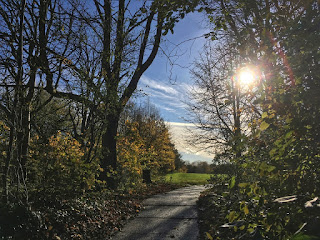 We went out this morning for our walk, as usual. This is a habit that will stand out as a good thing from the pandemic - we decided right at the beginning of lockdown 1 that we were going to walk each weekday, and barring the odd day when it has simply been too wet, or when one of us has had something happening early in the day, or the handful of days I have been away, we’ve continued ever since. It’s a great way to start the day - some movement, some fresh air, some daylight, and a chance to talk over whatever needs discussion before MrEH settles to his days work, and I try to not annoy him too much just by pottering about the place doing...whatever.

This morning my plan was to walk with himself, then add on another few miles running afterwards. My kit was on, I walked in my running shoes to facilitate a smooth transition from one form of exercise to the next. And then, 10 minutes away from the end of the walking bit, the heavens opened. There had been a little light drizzle earlier on, but the actual “rain” wasn’t due until 10am according to the weather forecast app. The app is an inveterate liar - I know this. Today it proved it. 9.15 = deluge. Deluge to the point where I said “I’m not running in THIS!” and we squelched home. A change of clothes was needed by both of us when we got there too - as I say, a deluge!

A few hours later though it was altogether a different story - the sun was out, the sky was blue and it was quite clearly perfect running weather! I love this time of year - the temperatures are great, far nicer to running than the sticky heat of summer. The colours are amazing, and the light too - just beautiful. So I found some dry leggings (there was no way the ones from this morning were going back on!) and some dry running shoes (ditto) and laced up and got out...to discover that my legs felt heavy, my breathing felt rough, and it generally felt like flipping hard work! Frustrating when this happens - there’s nothing you can do about it but grit your teeth and get on with it, or give up and walk home if it feels REALLY thankless. Today I was only after a gentle 3 miles to round off my week - usually I’d round it up to 3.1 for the straight 5k, but today, no - I reached the turn towards home and decided that the straight line rather than the “add a bit of distance” short diversion was in order. Of course when I got home, and looked at the stats on Strava I discovered two things - firstly that it was substantially faster than it felt, and secondly - THAT WAS WHY IT FELT SO TOUGH! Honestly - will I ever learn?!