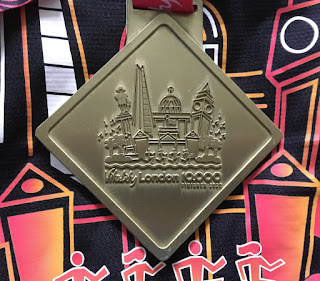 In the running world, we love a #MedalMonday hashtag - and so you can imagine my glee when I heard the post drop through the door earlier today to discover that my medal and shirt from running the Vitality Virtual London 10k a few weeks ago.  This is a run that I would never have signed up for in its usual form - too busy, too crowded - so it going virtual because of COVID-19 gave me the opportunity to participate, albeit on a route near home rather than in London, of course.

I ran it when I was really struggling with running a few weeks ago - with hindsight now I think it is pretty certain that I was suffering from some form of virus at the time - no, not THAT virus, not the right symptoms! I was SO determined to do it though  so went for it when really, I probably shouldn’t. It was slow, but I got it done, and the medal feels like a very well deserved reward!

This morning I went out for my first run in just over a week - and things felt SO much better! From the full-on slogs of a fortnight ago, it felt great to be able to run the first mile at a decent pace, then switch to run/walk intervals for another 3 miles - bliss! Everyone has the occasional bad run - you expect that, and just have to shrug it off and remind yourself that it IS just a one-off, and that the next one will be better. When the one after that, and the one after that, and the one after THAT too is still grim though, it becomes ever harder to overcome and get out there again - hence the week off, in part, and yes, that break feels as though it has done the trick, thank goodness! It’s wonderful to feel enthusiastic about lacing up my running shoes and getting out there again on Wednesday now!

Email ThisBlogThis!Share to TwitterShare to FacebookShare to Pinterest
Labels: Fitness, Me, Running