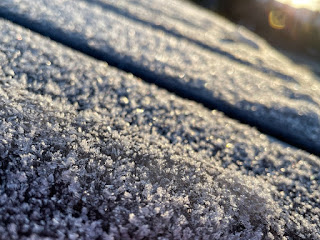 Well I don’t know about where you are, but it’s perishing cold here! We had a light sprinkling of snow yesterday, and although it did thaw to slush (ugh!) in some places it’s still sitting crisp and white on the ground in others. There was also a heavy frost over the town overnight  - meaning poor devils who had to go out in their cars this morning had a nightmare job of scraping or defrosting. 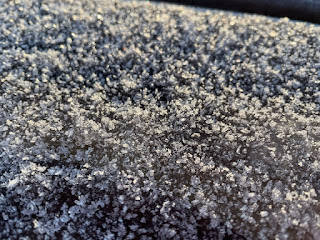 The two photos here are the frost on the picnic tables outside a local pub/carvery. I love how well you can see the crystal formation of the frost and ice! This was on our walk this morning - a slippery affair in the course of which we both slid and nearly toppled over several times - it rather focuses the mind about treading carefully and making sure you don’t go over at the moment it must be said - more than ever we would certainly NOT want to end up at the local hospital at the moment!

Today I start two weeks of officially being classified as a keyworker - I have been called for Jury Service again, and if I do have to attend court my journey there by car will be considered essential travel. I confess I am in two minds - while having to attend court would of course leave me a lot more vulnerable to the risk of covid infection, or at least to being considered a close contact of someone who later tests positive, requiring me to self-isolate, the thought of having something constructive to do with my time is utterly wonderful, as is the idea of some social interaction with a few different people!  Also, oddly enough, the thought of putting on less casual clothes for a change - my “work uniform” of skirts, tights, and smart jumpers along with my much loved knee high boots have been sitting unworn in the wardrobe for realistically close to a year now - as for the 4/6 weeks ahead of lockdown one I was wearing jeans and sweatshirts as the work I was doing involved much handling of old files which tend towards being quite grubby and dusty! Who would ever have thought that the idea of putting on a skirt would be such a lovely one, however this is what 10 months of jeans, leggings and snuggly jumpers does for you! We’ll see - I wasn’t required to attend today, and have a number to call later to check whether I will be needed tomorrow.

Email ThisBlogThis!Share to TwitterShare to FacebookShare to Pinterest
Labels: Me, weather